AFTERNOON SAFARI
Details and bookings
After settling down in the resort, a hearty lunch and a refreshing nap, our jeep driver Chandan picked us up from the resort for our pre-booked afternoon Safari.

Safaris begin at 4:00 pm however it is better to report to the main gate a good half and hour before as there is some paperwork apanning three queues which needs to be done. The time for safari varies with season, so prior information must be gathered.Only 50 jeeps are allowed inside the reserve at any given time to protect the sanctity of the forest. It is advisable to book your safari online especially on weekends rather than losing out a slot.

Finally at around 10 past 4:00 pm we entered the reserve.

Feast for the eyes, and ears

The forest was painted in hues of green and browns. The may heat was soaking up life out of the trees.The forest was not heavily dense, or green, rather turning to yellow and brown. There was a slight wind even in the afternoon perhaps carryig the tales of the wild.


We saw very many interesting trees, shrubs and water bodies.There were some excusitive root formations and lush red leaved trees which gave a whole new character to the forest.


The forest was teeming with langoors, peacocks, nil gai, deers and the varied birds. We even spotted the occasional bara singha (twelve horned deer), jackal, wild boar, birds (tiger brush, owls, kingfisher, vulture etc). However the elusive Tiger was yet to be revealed.


Nature and animals each have their own way of communication. We got news from the base camp and from other tourist jeeps in the reserve about the Tiger calls being heard at a water body called Junewani. Like all other jeeps we rushed to the water body and waited patiently listening to the call of the tiger. In peak summers tiger spotting is higher as the forest is drier. Plus, water bodies are a frequented place, hence the logical wait.


However it was nearing 7:00 pm and the calls had not yet stopped. There had been no spotting today at Junewani. We had to leave the Reserve with a heavy heart as the time slot for tourists was over for the day.


It was only Dr. Abheek Ghosh and his team of photographers who spotted a tigeress as she crossed the gravel path right in front of their jeep. Well, I suppose they got lucky by venturing out in a different direction rather than following the other jeeps to Junewani water body.


Even though we did not spot a tiger, we were filled with a sense of peace and a feeling of being such a small speck in this God's universe. There was the Tiger to look forward to at the morning safari. And hope keeps me alive :)

Read about Getting to Pench and Accomodation here
Posted by Preeti Datar at 8:30 PM

Mowgli Land - Pench Tiger Reserve - Getting there & our Stay

May 2010
Day 1: Mumbai to Nagpur
I had a first sample of wild life experience and corporate-style travel at Pench, Madhya Pradesh. I left on a jet plane from Mumbai to Nagpur, got a car to pick me up at the airport and drop me off at a lovely Guest House. From there we had a full evening to sample the charm of Nagpur and the food at Haldirams was the highlight of the day. 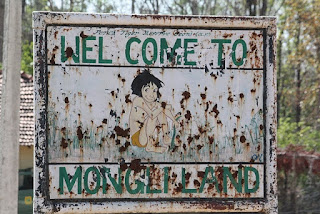 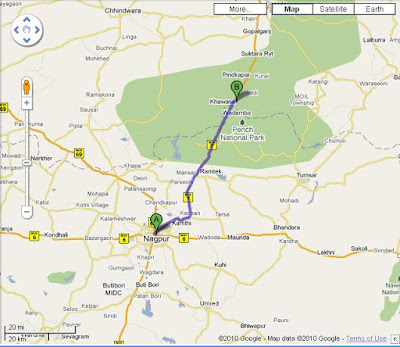 (The route we took)

We reached Khawasa at 10.30 am after a comfortable journey. We parked our car at the comppound of Forest Rest House, Turia (is virtually on the main road on left hand side) and went to inspect our rooms that we had booked in advance.

OUR RESORT
To our dismay the FRH was in a very bad shape.and, had no coolers. Adding to our woes were the recurrent power cuts, no power back-up and a 7 km drive to reach the Pench Reserve Main gate. We decided to scout for an alternate location to stay. I called up Just Dial, but in vain. Ultimately the FRH staff directed us to Kipling’s Court at Turia (A MPSTDC resort) which is a 5-minute drive from the reserve main gate.

Kipling's court is a very well maintained jungle resort. The entrance to the lobby charms the visitors with paintings from Jungle Book. The lobby is warm with wood accents and tones of brown. The staff was friendly and I got a good feelign about the resort.

The resort boosts of A/C  (RS. 4000/-) and non-A/C (Rs. 3000/-) deluxe rooms (extra charge for extra bed) and a decently clean dormatory at Rs. 700 per person. The resort also has a central dining area, well maintained lawn, conference room, indoor games and jeep/guide facility for the safari.

Food is buffet style and except for people staying in dorms, non-veg food is available to each person. However, on request you can enjoy a non-veg delicacy even though you maybe staying n the dorm by payng a nominal charge.

We were five people and hence opted to stay in the dormatory. The Dorms were clean and had a cooler. There are 3-indian style lavatories and three-washrooms in the dormatory common area. Overall the dorms were a great value for money especially since accomodation in most wild life reserves is expensive due to prevelance of seasonal tourists.

There are other staying options/hotels which can be booked from the MP tourism website.