The railway station was quaint - the crowd, sparse.  We walked half a km to the rickshaw stand, only to be welcomed by the majestic gate of holy town of Murudeshwar.

As we entered Murudeshwar town, the sea breeze and smell of fish was unmistakable.  Though it was only 7 am, the town was abuzz with pilgrims heading towards the sea shore where the mighty temple and a huge idol of Lord Shiva stand tall.  Both of these are visible from afar - including Konkan railway route.

Built at the very edge of the sea, the temple is imposing and stands guard to this coastal town.

After checking into our lodge and a quick bath later, we visited the temple complex in the morning for a peaceful darshan.

We against visited the temple complex at sunset to be awe-d by the grandeur of idol of Lord Shiva gracing the purple skies and the sheen of the gopurams.

Standing under the night sky, bowing to Lord Shiva, I was truly humbled!

We hired a taxi from Murudeshwar to go to Jog falls.  The drive to Jog falls was scenic and yet again, the Western ghats did not fail to amaze me.  One minute we’d be privy to lush forest and the very next minute we’d spot a river and a hamlet.

70 kms and 2.5 hours later we arrived at Jog Falls.  Having visited Dudhsagar, I was disappointed that Jog falls can be viewed only from the view point – which, in my opinion, is too far from the falls itself!  The falls – though second highest drop waterfall in India – appeared rather meak.  Perhaps the villagers were right, poor monsoons are to be blamed!

In spite of being slightly disappointed, but yet mesmerised by the falls, a quick lunch and lots of photos later, we went to a second view point and brought the rain with us.  From this view point we could see the other side of Jog falls.  The fog was playing hide-n-seek with the KTDC guest-house in the background.  The sound of raindrops on my umbrella and the gush of the waterfalls was music to my ears, while the falls and the fog was a feast for the eyes!

I lost my heart to Konkan railway

We took a passenger train from Murudeshwar to Gokarna.

Murudeshwar station was small, yet so adorable.  Manned by just 3-4 railway staff, it felt like a world in itself – where ever so rarely a train would pass by transporting the locals and the curious tourist.

Now, Konkan railway is famed for the stellar views it offers - Western ghats, mighty coastline, small villages, multiple river crossings and countless tunnels.  I loved every bit of the one and half hour train journey.  Inspite of the sun shining down on us, the fresh air and lush greenery kept my spirits up.  We crossed several towns – Manki, Honnavar, Kumta – to reach Gokarna, our next halt!

Luxury in sleepy town of Gokarna

Having stayed in a budget lodge in Murudeshwar (Kamath Yatri Nivas), we decided to pamper ourselves and checked into Sanskruti resort (Om beach road).

The resort boasts of cottages build around two-level of swimming pools, separated by a pretty wooden beach.  The rooms were cozy and worth every penny we paid.  Food here was not so great, but I’m sure they will improve in time.

The staff won us over.  As we did not have our own transport, the Manager himself came to pick us up from the station.  The staff arranged for auto to take us to the beach and even gave us sight-seeing tips! 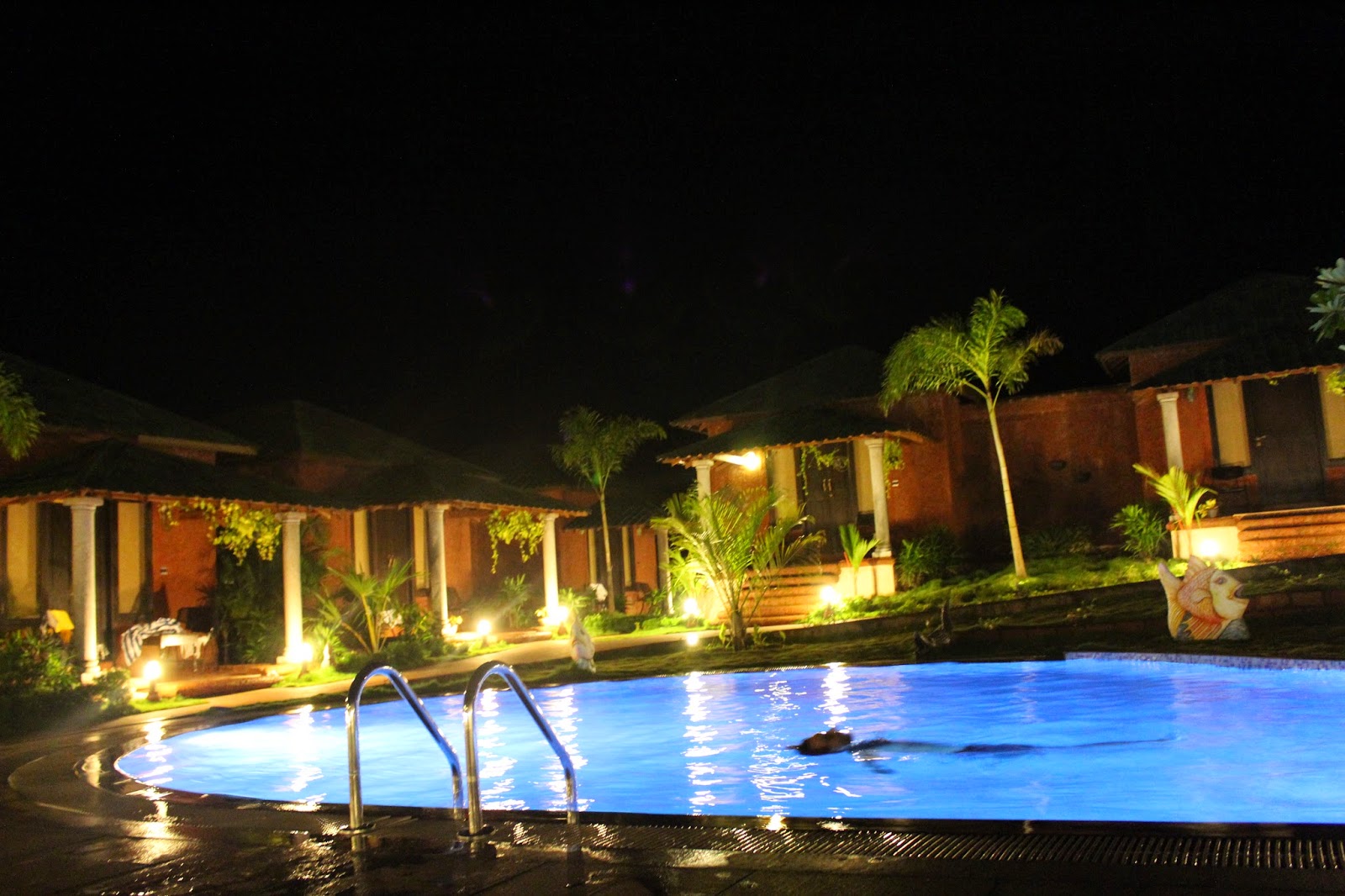 In fact, an hour before we were to check-out, I gave into the temptation and jumped into the swimming pool! Indeed I loved to be in the lap of luxury.

Gokarna beach was a sheer disappointment.  Frequented by locals and those on pilgrimage to Gokarna (Ganapati and Mahadev temple), this patch of beach is dirty and can be ignored.

Located between Gokarna beach and Om beach, the views of Kudle beach from the road a-top the mountain is stunning.  This beach can be visited only in low tide after descending for ten minutes through a jungle trail – hence lesser tourists come here.  The beach was tranquil and the waves quite gentle!

However, the best decision we made in Gokarna was to visit Om beach before visiting the other beaches (on recommendation from hotel staff)! In fact, Om beach turned out to be my personal favourite beach in
Gokarna and I’m glad I came here in daylight and at sunset. 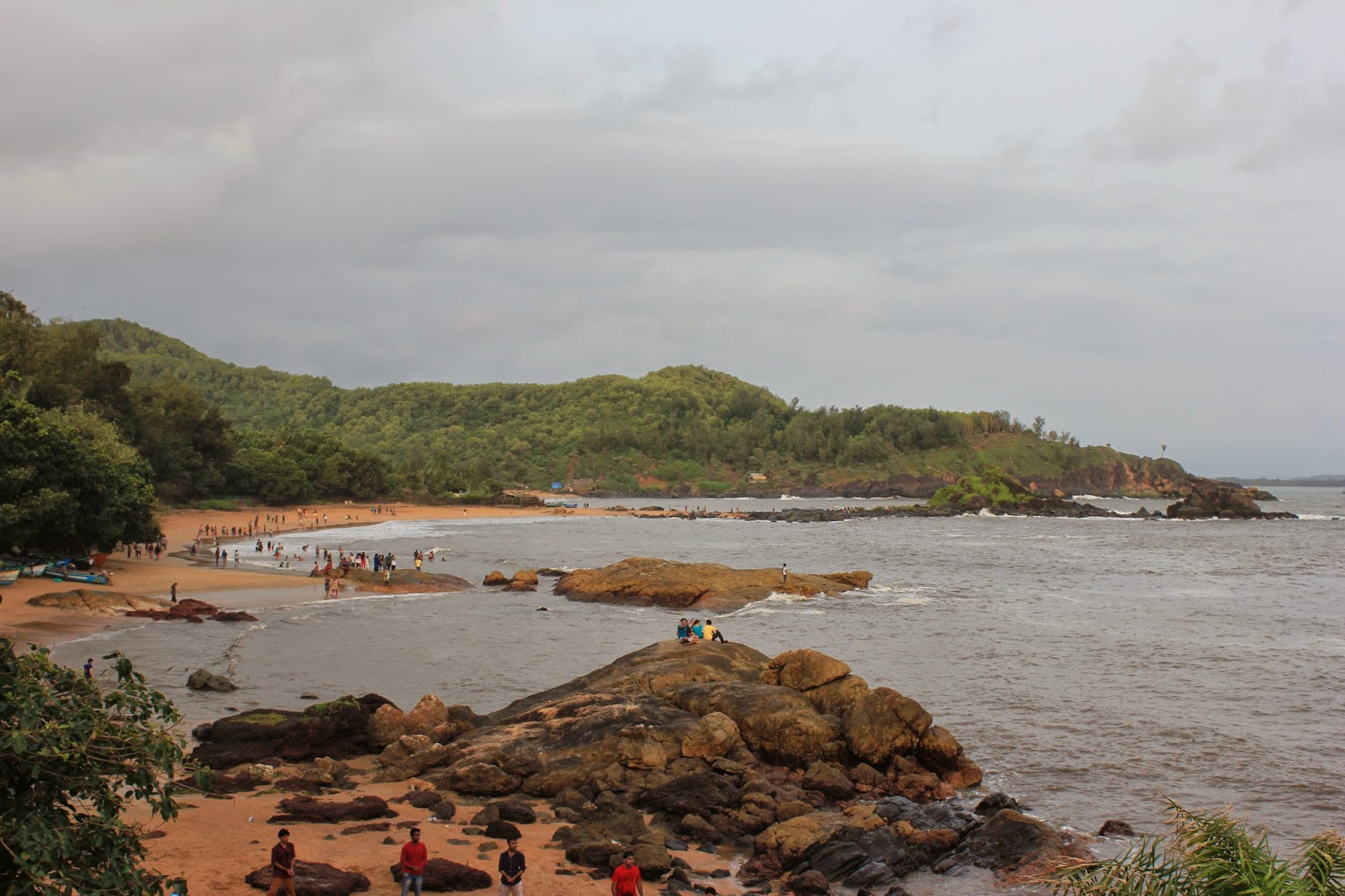 The beach is divided into two semi circles which form the “3” of Om when written in Devnagiri – hence the name.  One needs to trek for an hour (half-moon trek) to reach the point from where the “Om” shape is visible.  We gave the trek a skip partly due to monsoon, but mostly due to safety issues (two girls!).
Instead, we made the most of Om beach; strolling bare-feet on the beach one evening - taking in the sunset, sitting on the rocks next morning- introspecting.

Gokarna does not have the glam factor of Goa (and thankfully so!).  But it does have its very own round-the-year shack  - Café paradise (Kudle beach) and Namaste Café (Om beach).

We dined and lunched at Namaste Café which overlooks one crescent of Om beach and the rock patch.  In spite of enjoying monopoly, this shack is decently priced (booze and food!).  While the only available music here is the sound of the waves, I did hear a strain or two of jazz playing from the jukebox (or not quite?).
The conversations here are free-flowing as is sharing a table pertty common.  We instantly warmed up to strangers at our table and made small talk over beer.

Somehow beer tastes nicer by the sea-shore and gets you buzzing sooner.  Add to it the goodness of Nutella pancakes and it’s a combination made in heaven called Om Beach.

Perhaps on my next visit here (whimsical thinking!), I’d love to stay at Namaste café and trek to half-moon beach – a reason enough to come here again!

All good things come to an end – so did this trip! But not without a lot of drama!

We were stranded in Gokarna (though I didn’t mind that) without train/ bus/ cab at our disposal for our return journey.  Our only available option was to hop on to the train, in general ladies compartment and brave it out till Mumbai.

To my amusement, the ladies compartment was bearable.  In fact, a group of women (nearing the senior citizen threshold) kept me mighty entertained till Madgaon.  Thereafter, it boiled down to holding on to your seat and dozing off!  I did this quite well.

As I arrived in Mumbai – after an epic train journey and with a sore back (thanks to sleeping on a wooden berth all night!) – I was sure that the impromptu weekend was a totally memorable one!