Trek to Lohagad Fort was supposed to be a bonus of a leisurely stay at Lonavla, however, it turned out to be the highlight of the weekend gateway. 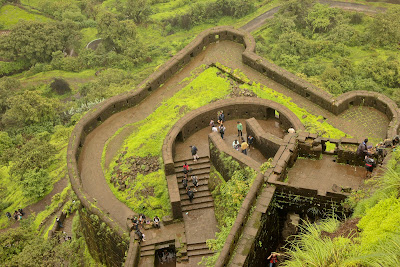 A sturdy fort built nearly 2000 years back, Lohagad is popular on the trekking circuit owing to its location and relatively easier climb.  We drove to Lonavla railway station and then were at the mercy of locals (due to no sign boards) to guide us to Lohagadwadi (10 kms from railway station) which is the base camp for the trek.  The road had many steep hair-pin bends and is relatively empty, but we were amazed to see so many people at the basecamp.

We started the trek at 11.30 am, equipped with cameras, waterbottle, umbrellas and anticipation.  There are huge steps for most part which makes it easy to climb, but the rain and the moss can make the climb challenging.  Trekkers also have company in the form of monkeys (protect your food) and the occasional snake (we spotted a long black snake).  The trek is enjoyable especially in this lovely monsoon, except of course if it pours intermittently.  Rain can also be a dampner as you’d miss out on the stunning views the climb offers, pavna lake, visapur fort and the greenery around.

The fort can be conquered in 45 minutes by regular trekkers, however we took almost 1 hour 15 minutes stopping for every possible photo opportunity and battling the sudden spurts of rain.  While we were climbing up, we had the company of enthusiastic kids from a Bandra school for company shouting slogans of ‘Jai Bhawani Jai Shivaji’ and many youngsters who made us laugh with their funny photo poses!

The fort has four dwaars (gates), the first one being Ganesh dwaar, while the one at the top has hanuman deities on each side of the gate.  The top of the fort has a to shivaji, hanuman and shivji apart from three majars (one in gumbaj structure).   A set of caves on the right of the entrance were used to store the wealth after raids by Shivaji and his sena on .  The fort has a big pond/ elephant pond which is quite an attraction with the trekkers. 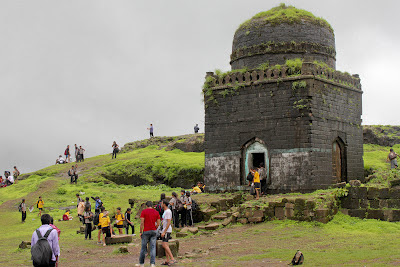 It was heartening to see a very clean and well maintained fort.  But what won my heart were the tunning 360 degree views which the fort offered and a reverse rain phenomenon in which we got completely drenched! (a ledge on the fort where the rain water gushed down while the upward wind pushed the same water back up in heavy, fountain like sprays!).

After enjoying on top of the fort for over an hour, we began our descent through harsh rain, slippery stairs and shoes without soles (my shoes were torn!).  The descent was much tougher, especially on the knees, but the exhilaration of the trek egged us on.

We were drenched as we reached the base camp, but a hearty lunch of vada pav, bhaji, bhutta, tea and jhunka bhakar was a perfect end to a trek.
Posted by Preeti Datar at 11:31 PM

Nice trip. Thanks for sharing your trip experience. Enveloped in a rich historical past, the fort was said to be used by Chatrapati Shivaji and other dynasties which ruled Maratha and Vidharbha kingdoms. The walk to the fort takes about 1.5 hours. If you want to avoid climbing the steps, you can also take an alternate route with clearly defined paths. Check out all best places to visit near Pune also.