Dudhsagar waterfalls – who’s the tallest all them all?!

Dudhsagar waterfall literally translating to 'sea of milk' (measuring 600 m) graces the western ghats between the railway line from Vasco (in Goa) to Londa junction (Karnataka). 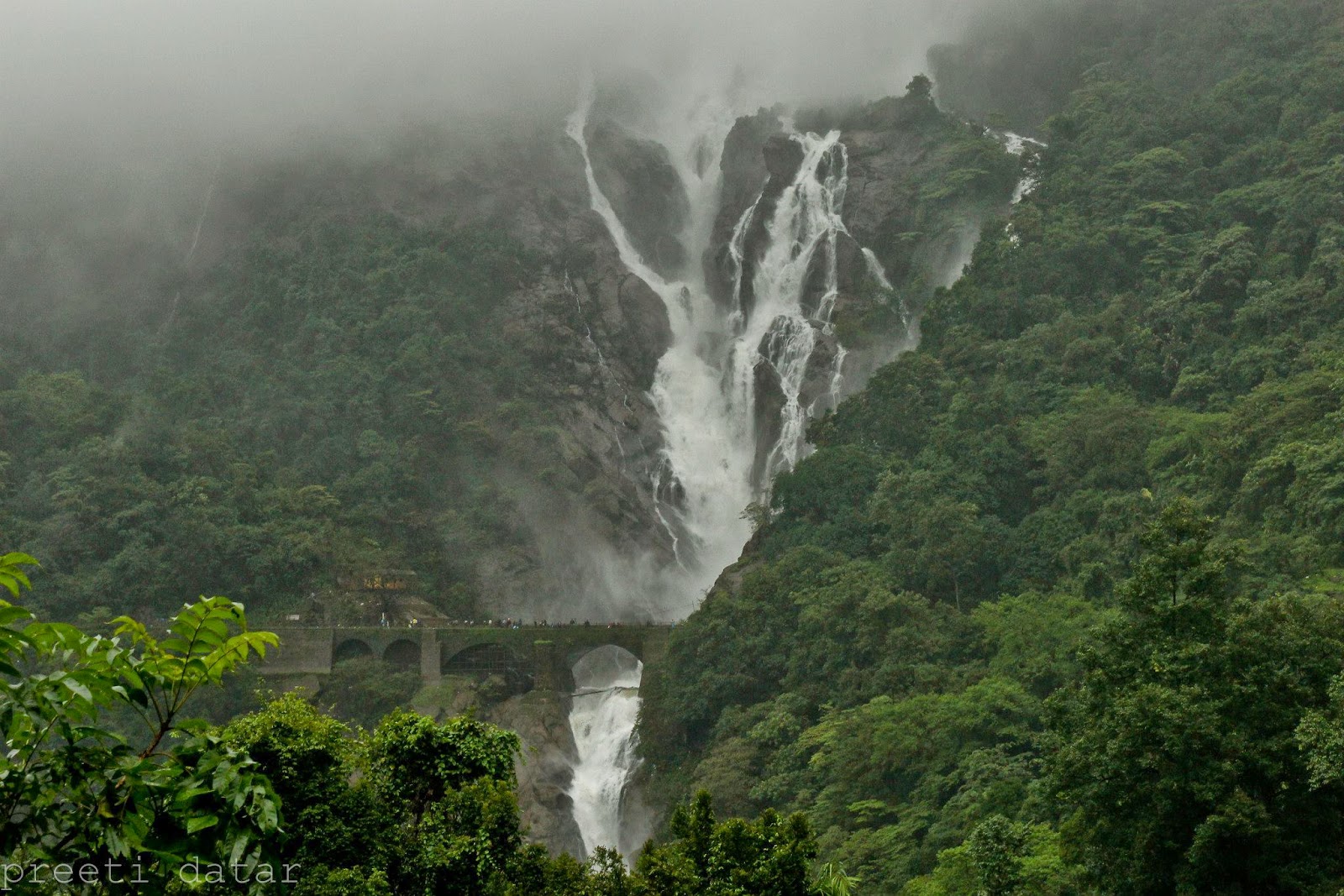 Second only to Jog waterfall (Karnataka), this majestic waterfall is a sight to behold. It holds the record for the tallest waterfall in India.  However, its popularity has increased manifold after the Bollywood movie Chennai Express was shot here!

I got the opportunity to visit the waterfall in August 2013, when the Indian monsoons were in full swing.  I visited Dudsagar waterfalls with trekmatesindia, a trek group based out of Mumbai. It was hectic trip (beginning on Saturday 8:30 AM and ending on Monday 8:00 AM), but every bit worth it. 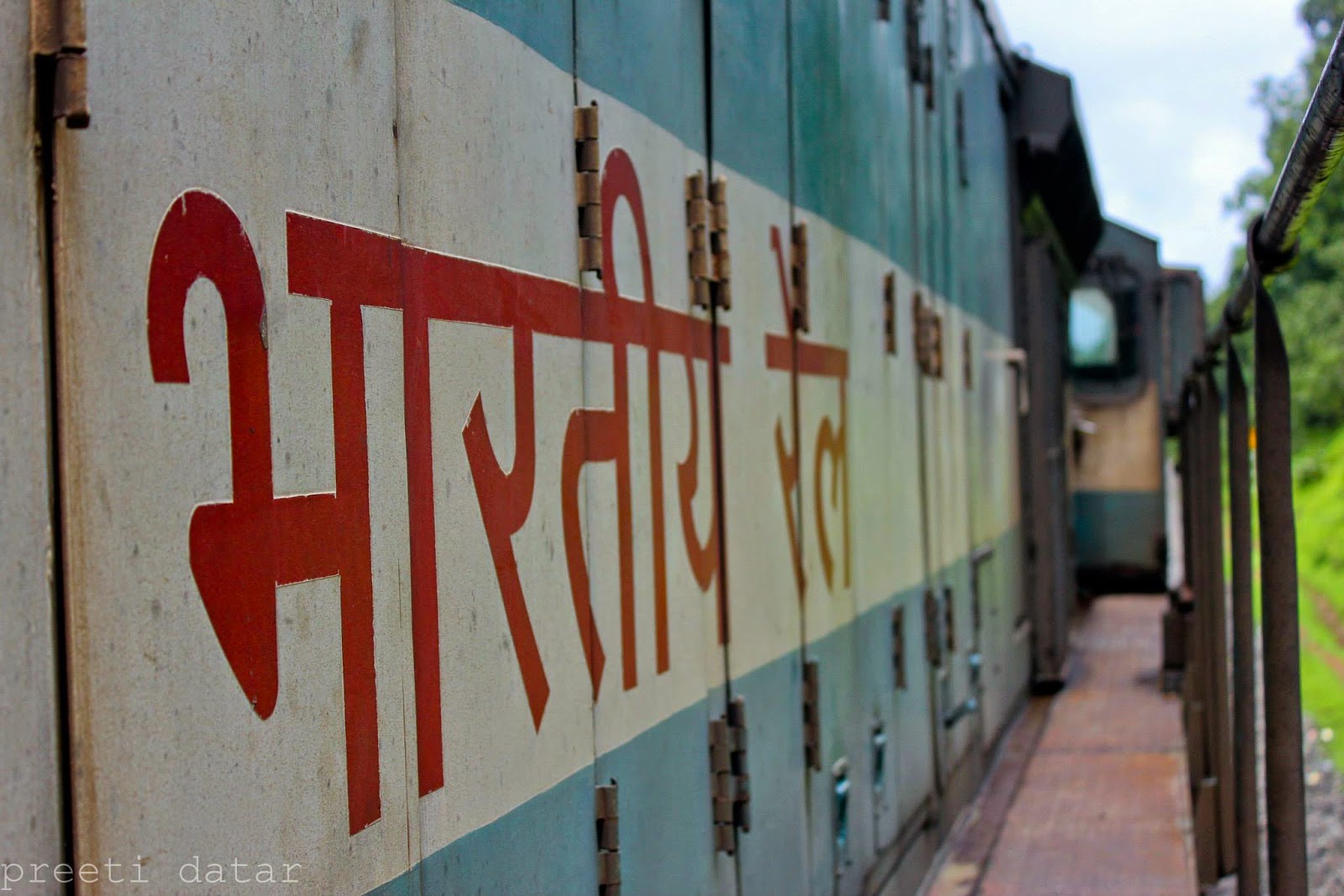 Like they say, journey is as important as the destination! Journey to Dudhsagar courtsey the Indian railways truly lived up to it! 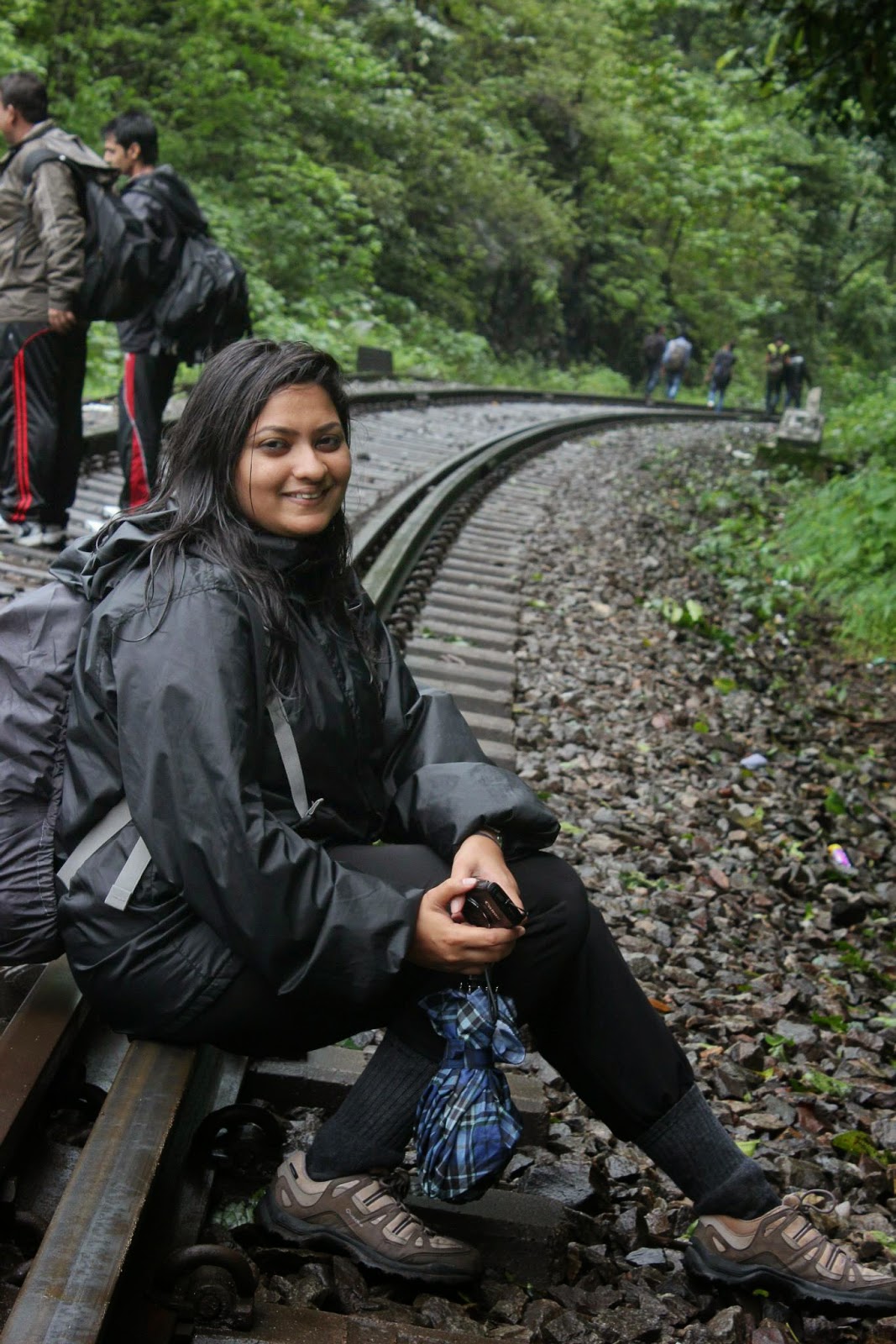 Many people just visit the waterfalls; however, walking from Castlerock railway station, ON THE RAILWAY TRACK, to reach the waterfalls is an experience in itself. 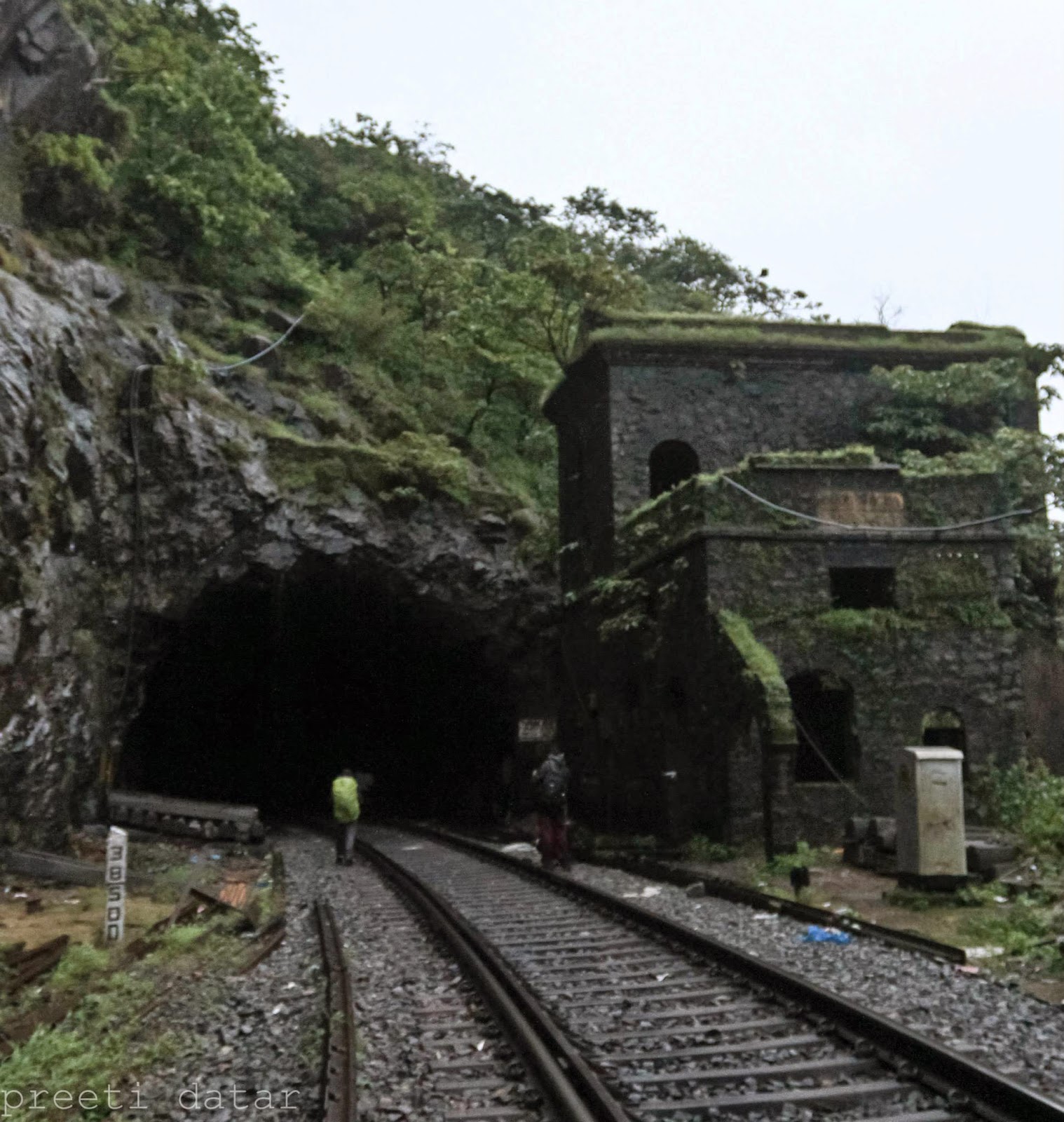 On the way one comes across dilapidated railway structures, many a tunnel and lots of hungry monkeys! 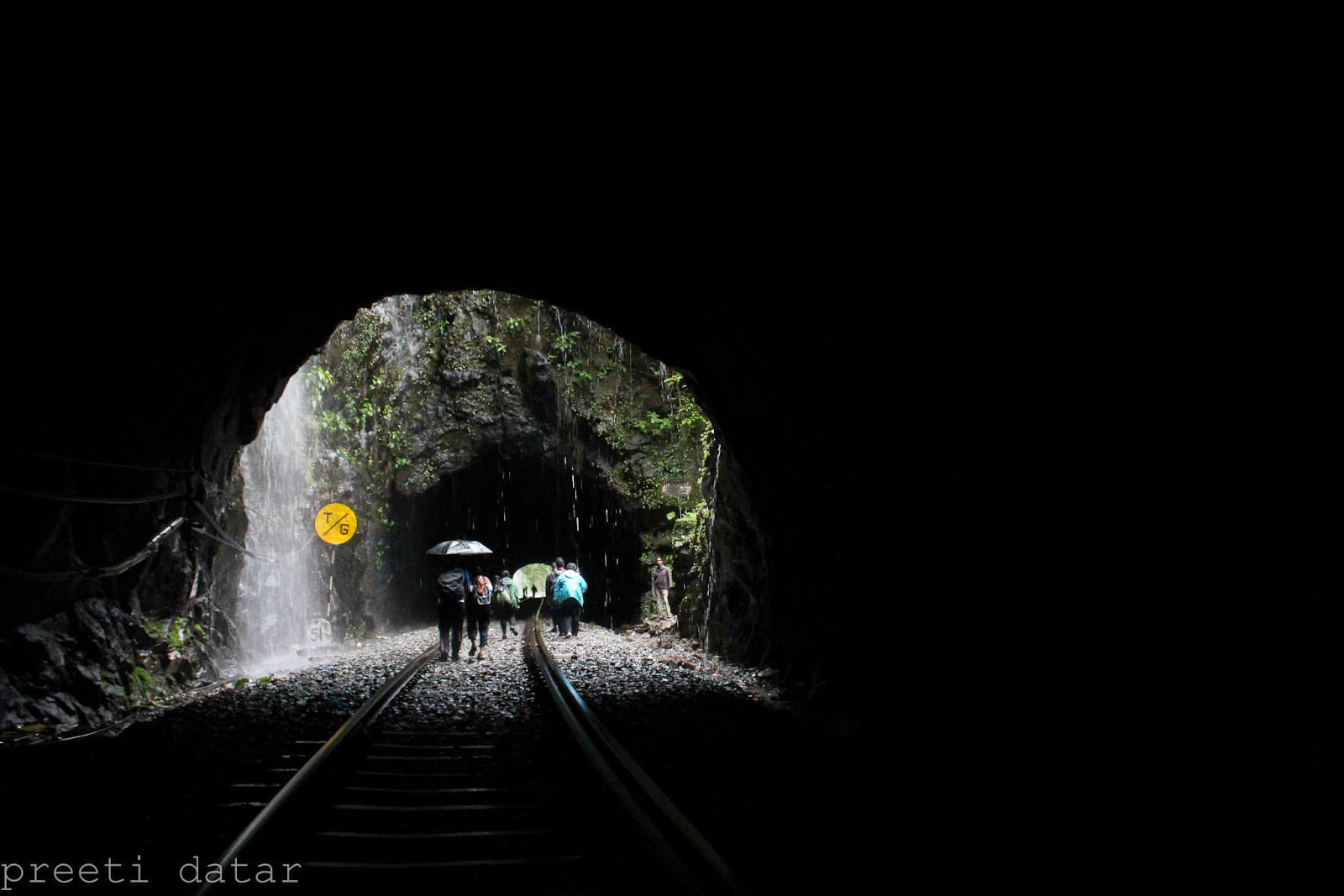 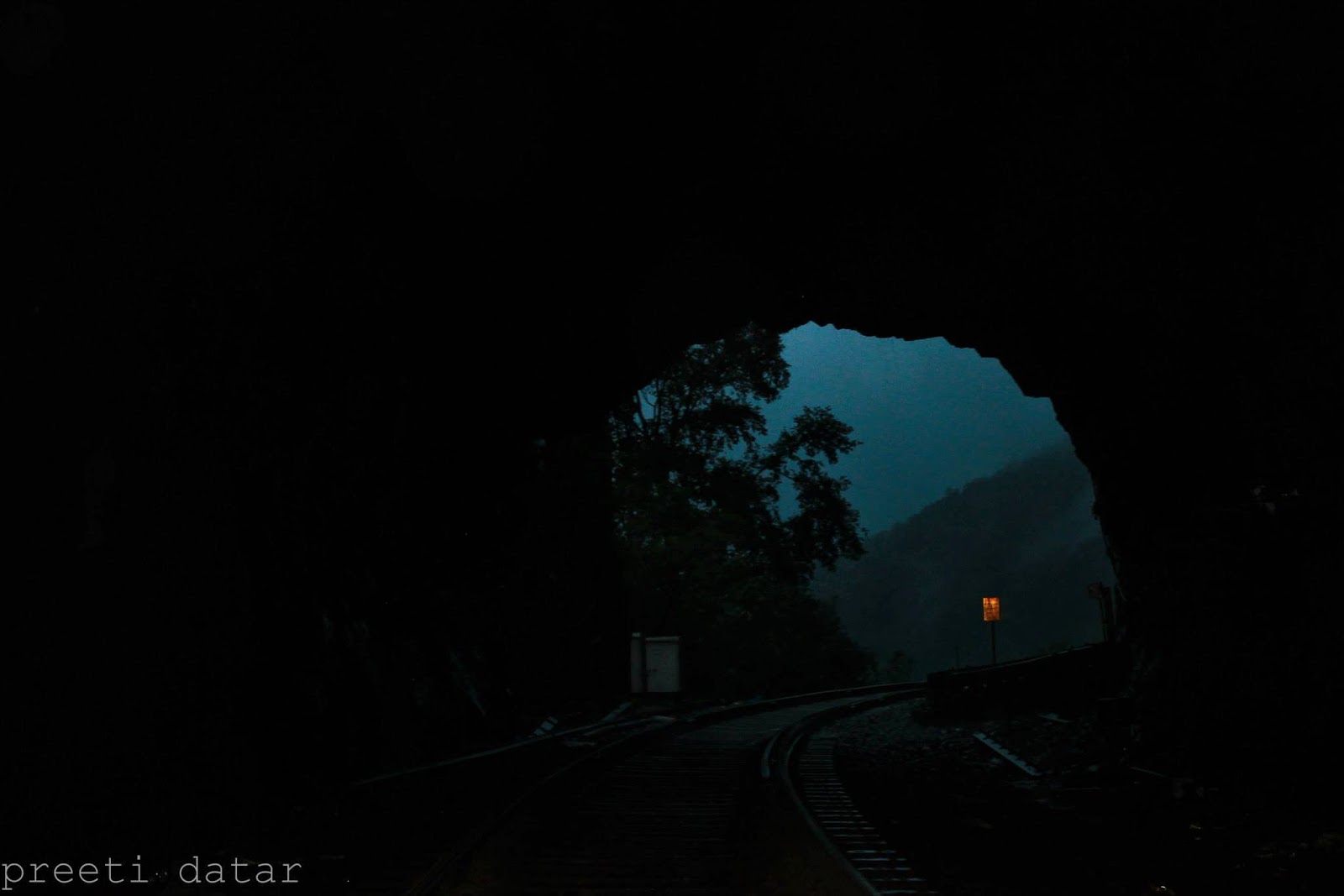 Best part of the walk is the lush green jungle engulfing the railway track and the art of tackling the numerous trains that pass by! 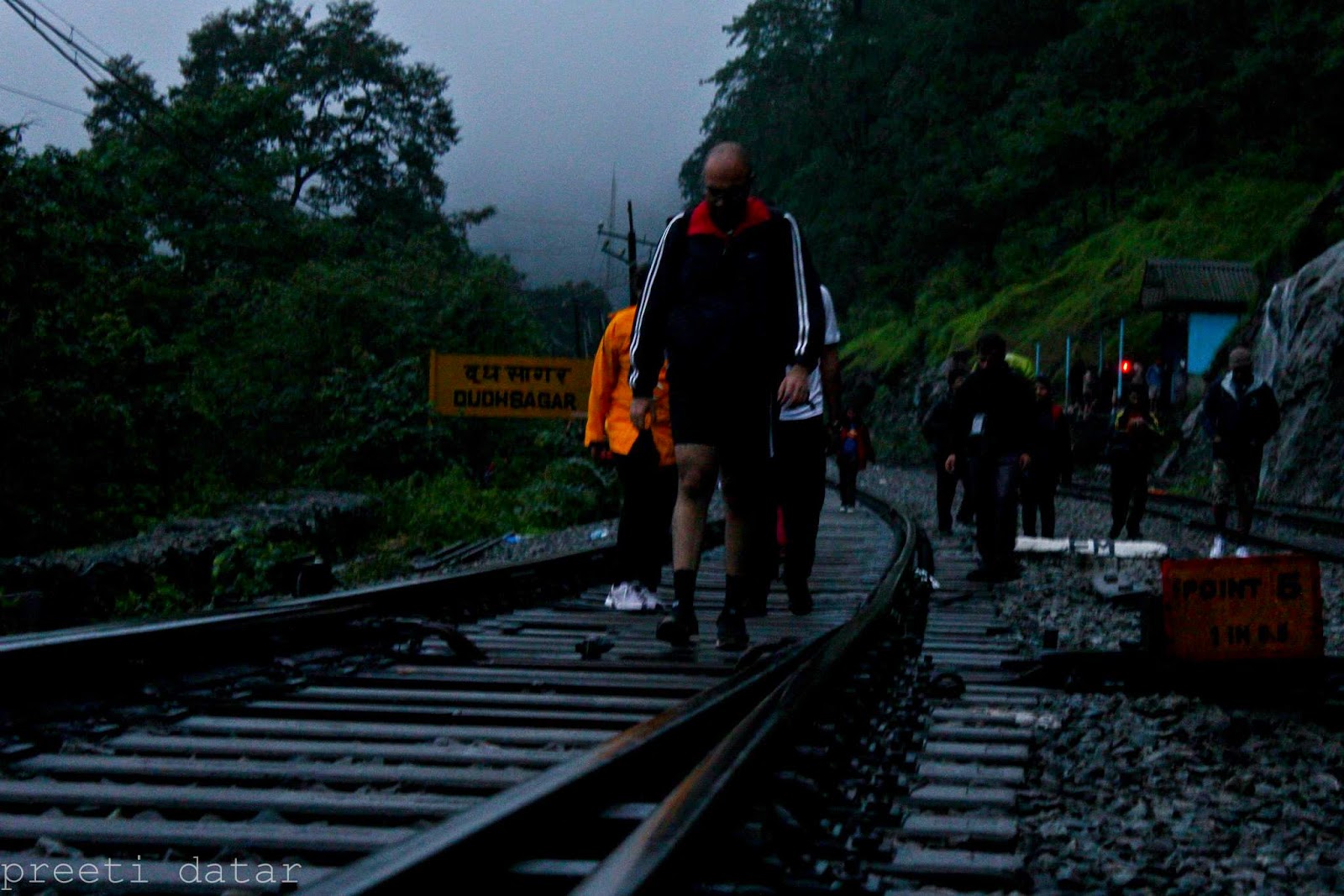 The not so fun part is seeing poop on the tracks, literally everywhere! - don't tell me you expected a picture of this!!

The waterfall mesmerized me and humbled me as I saw it up-close and personal! 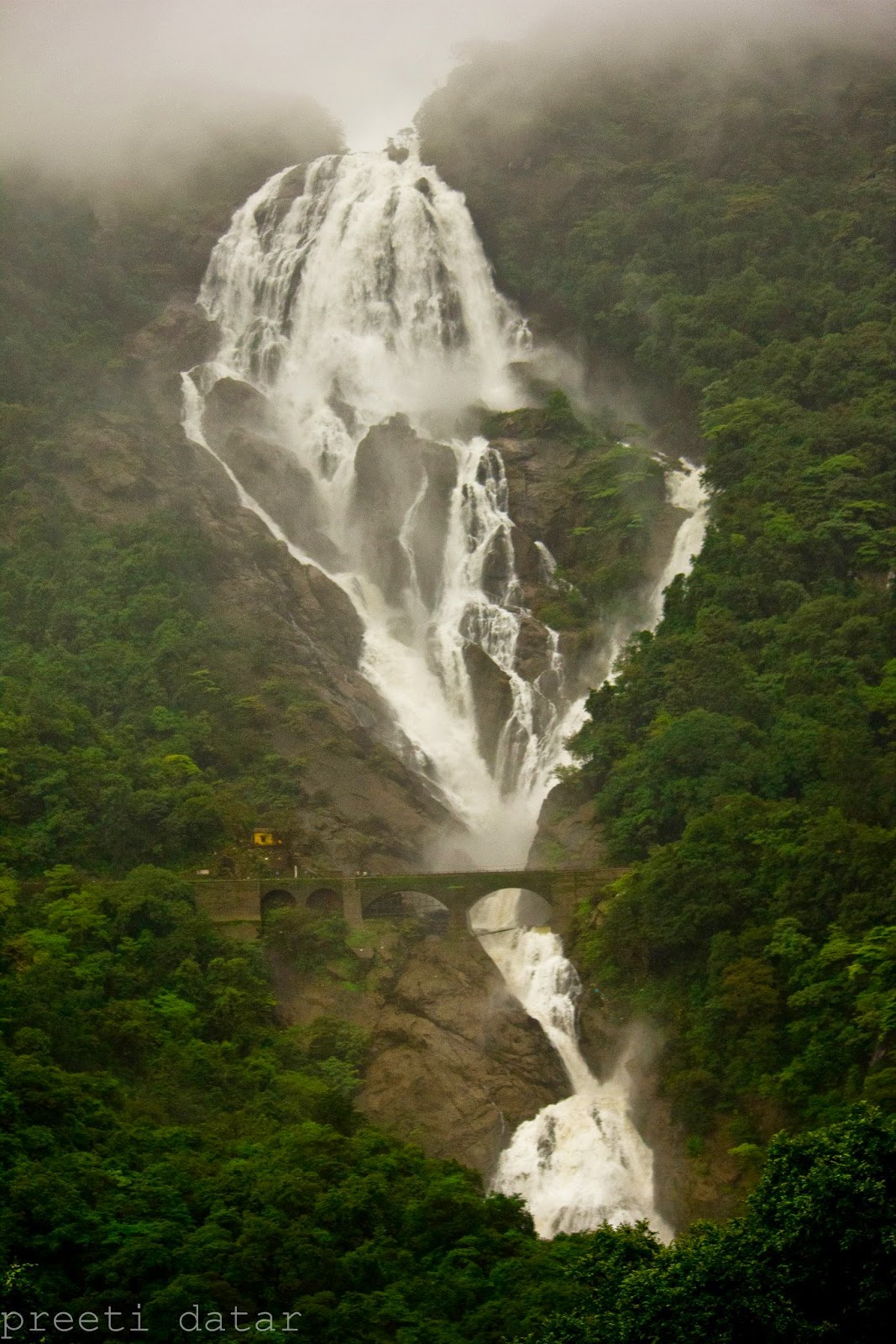 We couldn’t go to close to the falls as the wind blowing the water on us made my bones chills, inspite of a wind cheater! 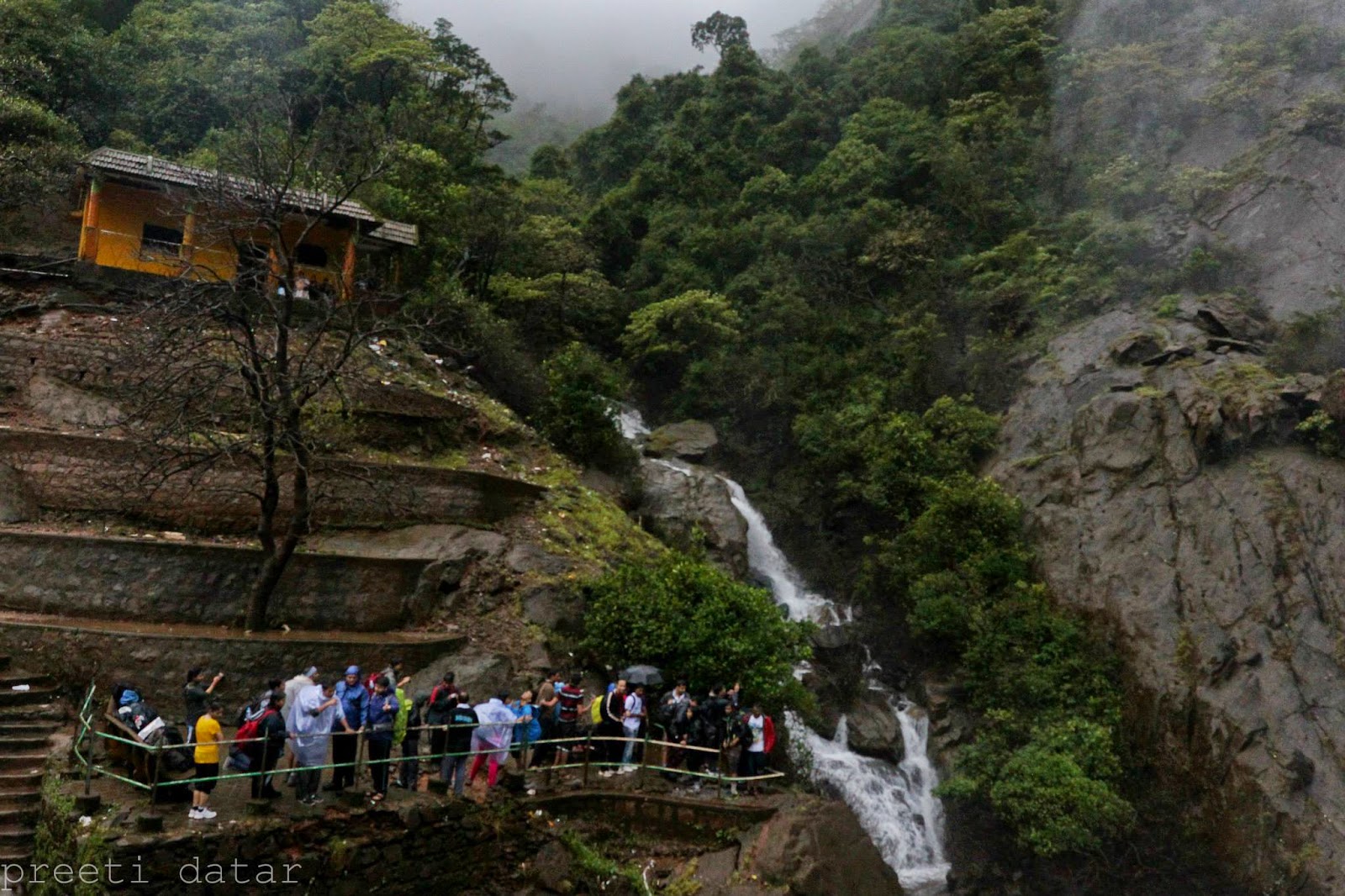 The upper and lower half of the waterfall is divided by a railway bridge. 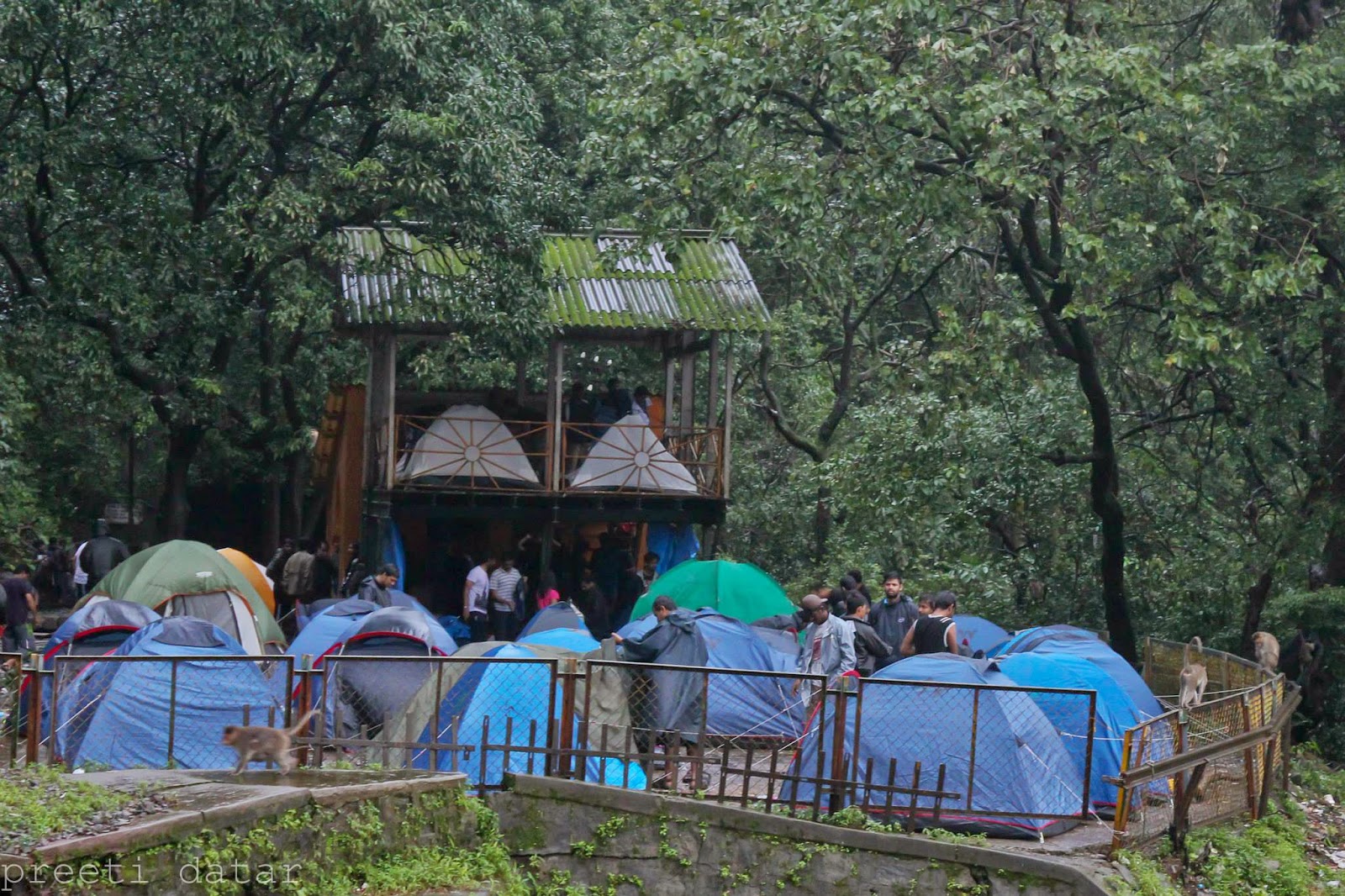 And next to the waterfall is a campsite where we saw groups from Bangalore (Bangalore trekking club) set-up their tents and enjoy the seclusion! 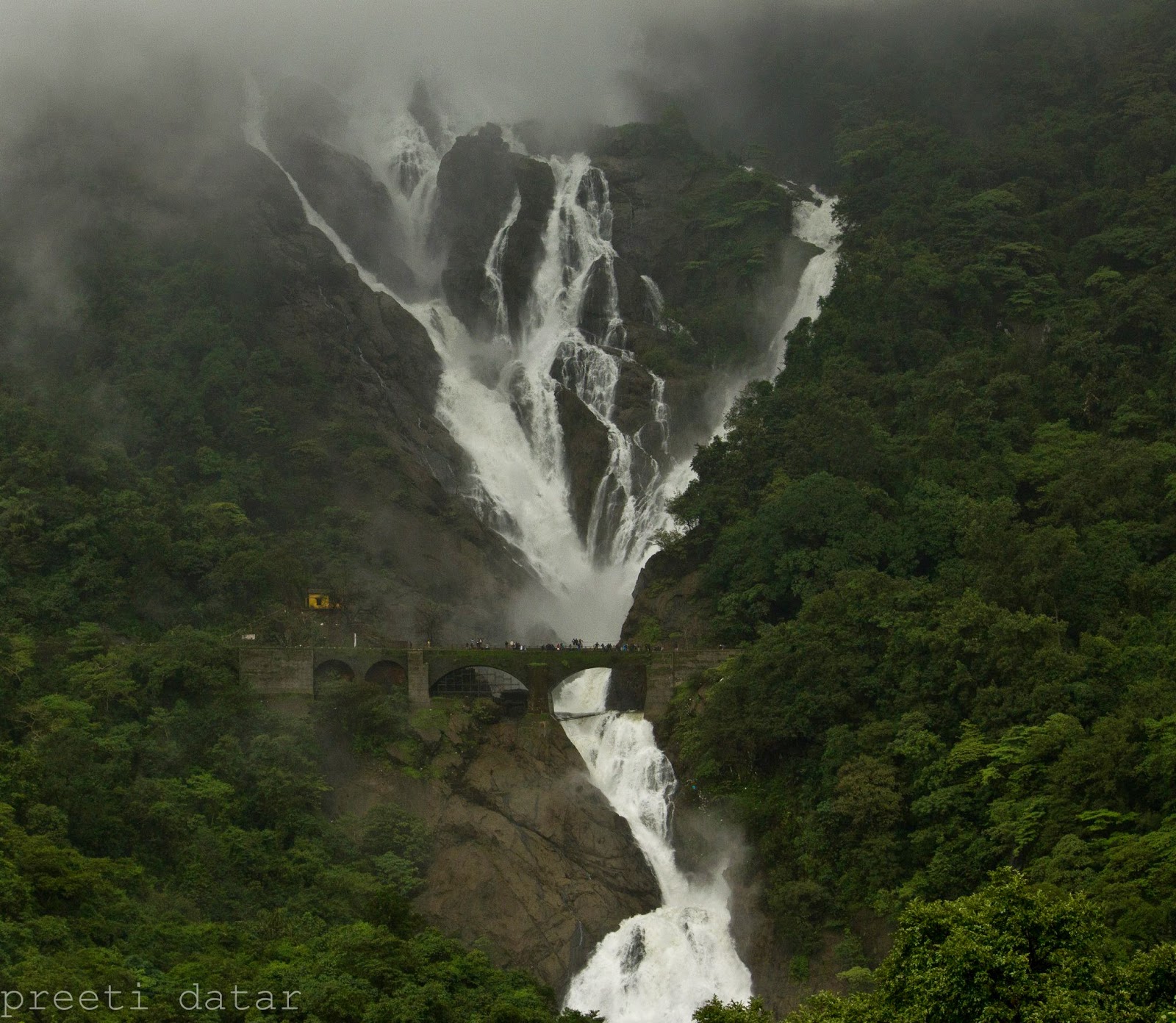 Dudhsagar demands to be admired again and again! I got to see the waterfall once again from the train while returning to Pune from Dudhsagar.  It’s beauty is magnetic!

However, the highlight of my trip was taking a lift on a goods train half way between Dudhsagar and Kulem:
(1) because I was exhausted of walking on the railway track!
(2) because it was adventurous!
(3) because of the motorman’s generosity, who risked going against the rules!

How to reach: While Dudhsagar has a railway station, very few trains stop here. 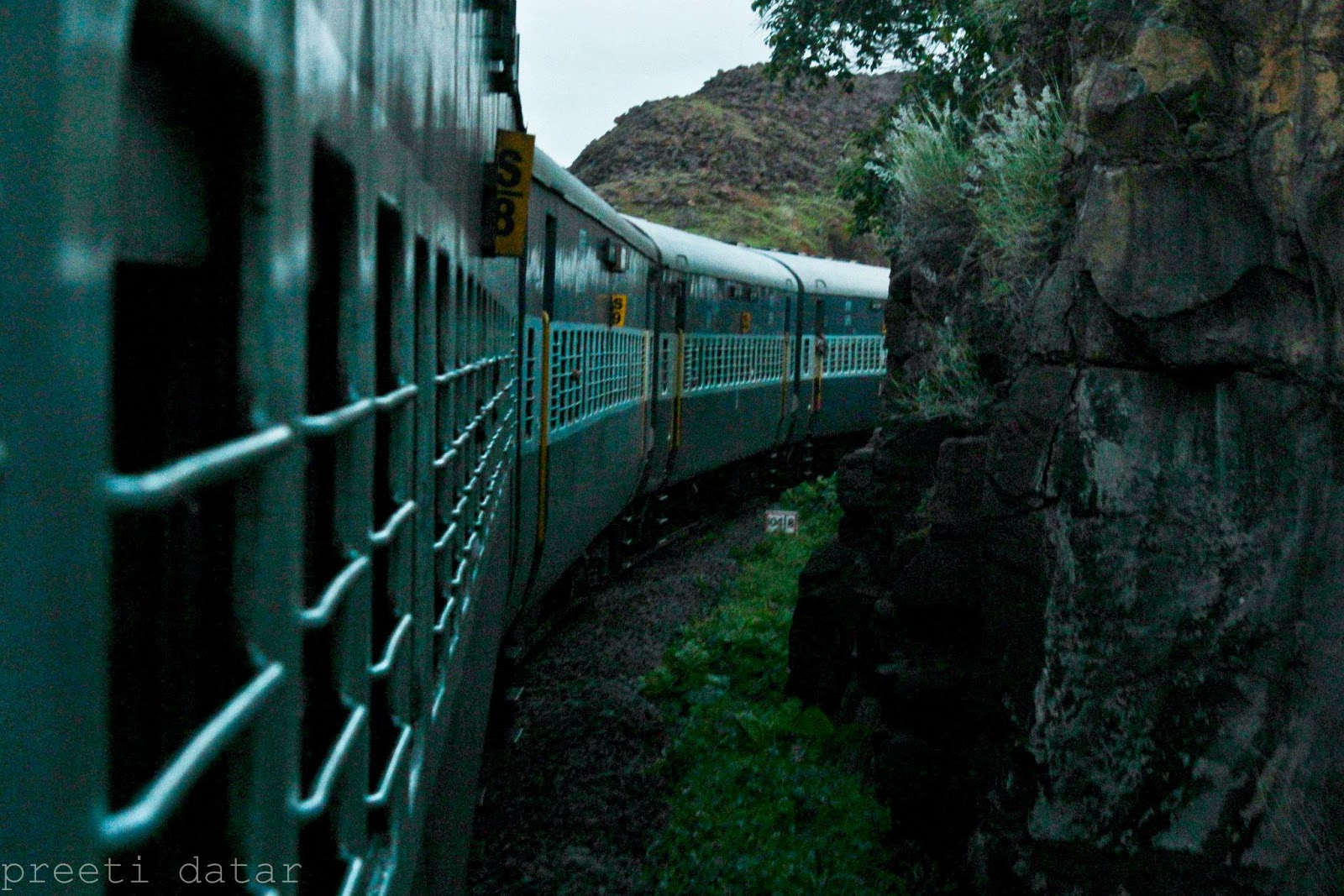 Option 1
Take a bus/ train to Pune
Catch Goa Express from Pune – 16:45 hours
Set your alarm for unearthly 3 am, get up when your alarm rings
Get off at Castlerock station and wait for veil of dusk to lift
Walk towards Dudhsagar waterfall (about 3 kms on railway line!)

Option 2
Take a bus/ train to Pune
Catch Goa Express from Pune – 16:45 hours
Get off at Kulem (about 9 kms on railway line!)
Walk backwards to Dudhsagar waterfalls or beg a goods train motorman to give you a lift (note: its not allowed!)

PS - Best time to visit is during or just post-monsoon!
Posted by Preeti Datar at 11:20 PM

So many outstanding pictures!

You actually make one ache for those raindrenched greens. I think a bit more in description would greatly enhance the effect of your travelog.

Thank you for the time you took to read the post and enjoy the pictures.

I intentionally omitted a long descriptive, but I'll keep that in mind for my next post :)

Yes, you should definitely visit Dudhsagar and club it with jog waterfalls!!

Too good preeti - loved it , njoyyyy

Thanks Niranjan :) you must go here!