In hindu religion animals are sacred. But a temple full of rats was more of freaky rather than a divine experience for me! Yes, you read it right - a temple full of rats! Big, fat, thin, black, white, furry, smooth shaven, you'll find them all in the Karni Mata temple courtyard. 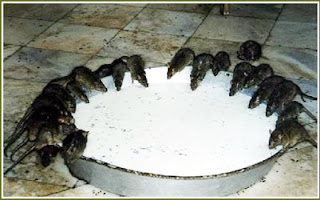 (rats, rats, everywhere...not a place to hide!, picture from karnimata.com)

This temple is located in Deshnok, Rajasthan (30 kms from Bikaner by road). According to folklore, Karni Mata announced that no one from her tribe would fall into yamraj's hands (after she had rescued a devotee's dead child back to life from Yamraj)and hence on their death, they're inherit the body of a rat(temperorily) before being re-born.

Watch the video of this Bizarre temple here

I visited this temple in December of 2005. I was shit scared to step inside the temple premises. Once inside, the terror rose simply because I not only had to keep my composure should a rat run over my foot(it's considered lucky, especially if the rat is white!) but also avoid crushing the rats under my weight (and assuring a place in hell!)A black rat scurried over my foot and left me feeling ticklish and frozen at the same time! 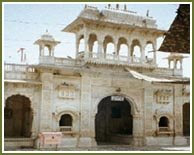 The temple isn't just about these crawling terrors. It's a visual treat for the eyes also! The marble structure, artistic main gate, silver doors with carvings and ample other architectural delights are a photographer's treat! 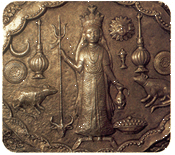 (silver door with idol carved on it, picture from karnimata.com)

Some people call the temple as the 8th Wonder of the World. I like to call it Ratatemple! (rip off on ratatouille)

Kala Dungar(around Bhuj) is home to the Duttatreya temple.It overlooks spectacular Rann of Kutch where one can spot white foxes. These foxes respond to the call of beats of a steel plate and shouts of 'langa' and to come and eat the food/prasad of rice laid down for them.

We saw atleast 30 foxes converge at a cemented area to eat the food and delight the tourists. The temple Bojanalay prepares food even for the pilgrims, should you decide to stay back for a meal. We decided against it as it was past 7 PM in the evening. Thus after witnessing the aarti at sunset (6:45 PM) and spotting the foxes we headed back to Bhuj.For those who wish to visit this temple, I'd suggest them to see the aarti at 12noon and get a better view of the foxes as during sunset, the foxes are not clearly visible and also because the drive down the kala dungar is narrow. 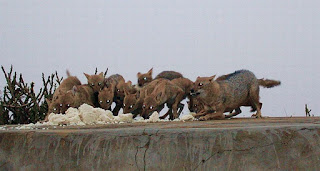 Another drwaback of going in the evening was inability to click pictures of the jackals. We tried with a digi cam, a still cam and a good camera with zoom and external flash, but nothing worked and all we could capture were the glowing eyes of the jackal!Oh, btw we were elated looking at a particular picture in the digi cam. We'd finally captured a jackal! - the elation was short-lived. We discovered that the seemingly jackal was a cow! :P

Out of the two temples, I was more freaked at the thought of rats than jackals! Size truly doesn't matter!
Posted by Preeti Datar at 5:05 PM