The fog hangs low, the salty breeze whispers secrets – the waves carry them to miles on end. The veil is lifted as the first sunrays reveal the unspoilt beauty. The sun, sand and the waves invite you to discover treasures that the living museum of Narara holds. Islands accessible by Road.


Located west of Jamnagar, Gujarat, Narara Islands are one of the 45 protected islands that comprise this Marine National Park. Barely 2 hours (60 kms) from Jamnagar city, Narara islands are sandwiched between two oil giants namely Essar and Reliance. Researchers’ abode and tourists’ fascination, Narara maybe the only islands accessible by road as well! (Yes, you read it right! - no boat needed, just your good old car would do!)

Overview
Ordinarily one would need complicated scuba diving gear, or at least snorkeling gear to take in the breathtaking (quite literally!) views of the marine flora and fauna; not at Narara though. Here one has to wade through shallow water and set off on an unearthing.

How the hell can one wade through the water and not stand the risk of drowning, especially the non-swimmers? - Easy, Narara is accessible only when the tide ebbs. You’d be surprised to know that the very coral reef that you’d been walking on would be drowned in nearly 15-17 feet of water when the tide surges!

The best time to visit Narara is from October to March when the weather is cool. It is prudent to check on the tide timings, either online or with the Forest Department. But as informed by our guide, usually from 12th of a month to the 6th of the next month, low tide is at 7 am and from 6th of a month to 12th of the same month it is from 2 pm.

Being a Marine National park-and hence a protected area- prior permission from the Forest Department is a must. Also, securing a guide (while tying up for the permits) makes the trip worthwhile and obviously more educational. 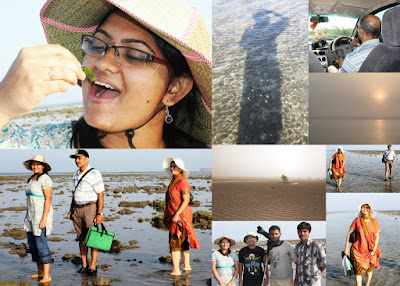 Remember, the earlier you reach the better it is. We were excited and ready to hit the water at 7 am sharp, but Hasanbhai, our guide for the day caused us a minor delay. Luckily it was a week day and we were the perhaps the only tourist, thereby making the reef exclusively ours for a few hours.

The first thing that Hasanbhai noticed was my footwear! I was wearing slip-ons (luckily with thick soles) and mom’s footwear was no better – conventional ladies sandals. For a minute I feared the end of the marine excursion that never even began due to the lack of proper footwear, read sports shoes or thick-soled floaters. He asked us if we would be able to walk on the reef with such footwear. “Yes!” we replied instantly. If we were cool with it, Hasanbhai had no issues.

A Walk to Remember


The sun had begun peeking out of the comfort of the puffy clouds. The air was chilly and one look at the water ahead of us was enough to spread warmth of anticipation in my body. As we walked over the soft beach sand, the mangrove forest planted fairly recently by the researchers marked sort of a green revolution for the islands. The type of mangroves found here is called Aurisia Marina. I found the mangroves very cute especially because they reminded me of miniature banyan trees! 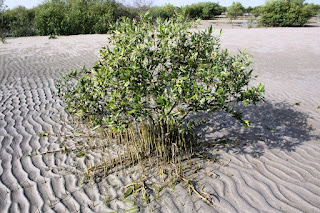 As we walked towards the shallow water, we saw sand crabs and Ring plougher. Sand crab spits out any sand-that it accidentally swallows-in the form of small round balls. These balls can usually be found in clusters of several hundred balls and form a unique pattern on the dry sand! Walking further we saw a hermit crab in a shell. If you’ve come across painted/decorated shells, they’re most probably shells of a hermit crab! We then saw a Ring plougher which is a marine creature that feeds exclusively on crabs and shells. 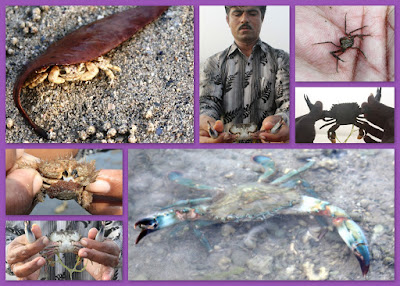 Crabs are yum to eat, but scary to be around. Sadly for me there were so many species of crabs! Nonetheless, the little terror of ghost crab, the peak-a-boo of the coral - crab stuck to bottoms of live corals, the vivid colors of the Neptune crab (most handsomely earning exported variety of crab), the creepy tentacles of the wolf crab, each specie marveled us.

When our feet touched the cool waters, the real treat for the eyes began. Imagine a plastic coated plant! We found just that – the padeira, more commonly known as plastic plant is brownish in colour and plasticky to touch. 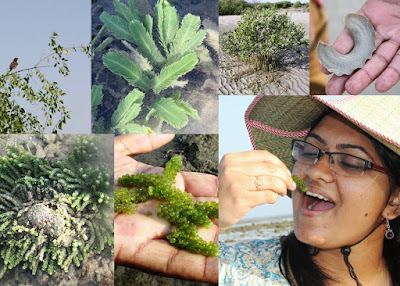 There were other flora types as well, the fascinating one’s being - the Feather plant (leaves shaped like feathers) and Sea grapes (miniature version of a bunch of grapes.

Coral reef under our feet

In my family everyone loves corals. We have several decorate corals at home thanks to dad adventures to Andaman and of course South East Asia. But here we saw corals lying on the sand. Imagine picking up a coral and using that to decorate your home. But sadly, most corals were brown and dirty. Our guide told us that corals should be washed and scrubbed and left to dry in the sun to make them as good as new! Finger coral/barnacles was the specie that we got back home as a souvenir.

Wading further ahead in the cool water of Arabian Sea, we saw a bright green, carpet like roundel. The guide told us to wade softly through the water (as it generates vibrations in the water as well as forces the sand and mud to rise and turn the water brownish, until it settles again thus blocking our view of the flora and fauna) as he’d just spotted a sea anemone. Sea anemone is a creature with tentacles (both long and short) which stays close to the ground and sucks in its body and into the sand as a defense mechanism. 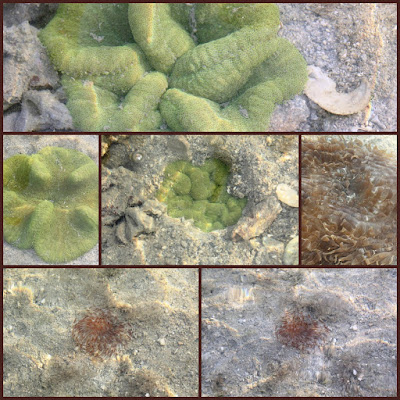 The green anemone has shot-trim tentacles, almost like the threads of a carpet. The moment I touched it, it shrunk and eventually disappeared into the sand. The next anemone we spotted was bright-red, with longish tentacles. The prettier among the two, it was even the more sensitive one disappearing into the sand at the slightest touch.

Imagine a fish that knows how to hold its breath, bloating up its tiny body to do so. Puffer fish fascinates by doing that and more. The puffer fish is a small fish and the second most poisonous vertebrae. It gives tough competition to Shankar Madavedan’s breathless by using its ability to inflate itself rapidly as a defense mechanism. It does so by filling its elastic stomach with water and hence saving itself from predators who get intimidated by the increased size and of course to stay alive when out of water for a short span of time. 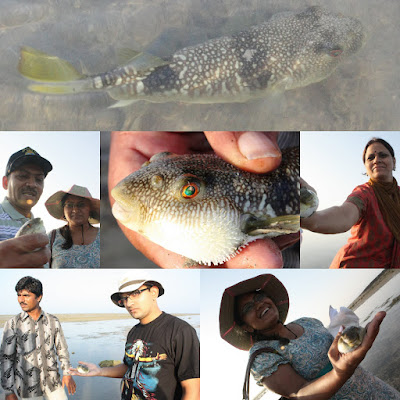 Initially I was very scared of the puffer fish, refusing to even hold it in my hand. But seeing my dad and brother do so, I gathered courage and asked the guide to gently place the bloated fish on the palm of my hand. It was woobly and not as slimy as it looked. As it held on to its breath with eyes wide open, I also held my breath in anticipation. It just sat there and the moment I placed her back in the salty water, it swam away to glory! The guide then chased the poor fish until she got so tired that she flipped her body to float on the water, back-down, like how we normally sleep on the bed. She lay playing dead for a while, then swam again as the tiredness subsided.

I’m not particularly fond of slimy, six-legged creatures….but octopus and its defense bowled me over. All through the walk, I was cribbing about not having seen any octopus yet, which mind you is the star attraction. But the cribbing ended and wonderment settled as we got to see not one, but maybe 7-8 octopuses. 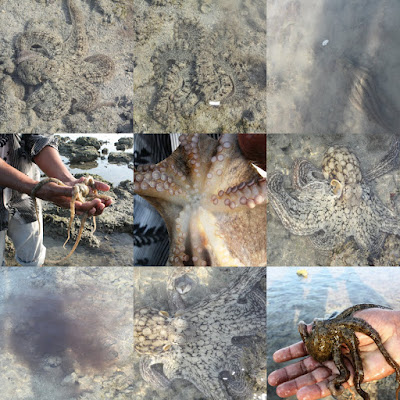 The first two octopuses that we spotted seemed to be a couple, for when the guide tried to catch hold of one of them (we presumed a female), the second one came near her and left a blackish dye, thus blocking the guide’s vision and protecting his queen of hearts! Love blossoms even in deep sea!

Further, the octopus is chameleon of water! If it’s swimming over sand, it turns brownish; if swims over rocks, it becomes grey and spotty and so on. The change of colour and pattern of its skin makes it all the more harder to spot. In my fear, I did not hold the octopus in my hand, but I did touch it. 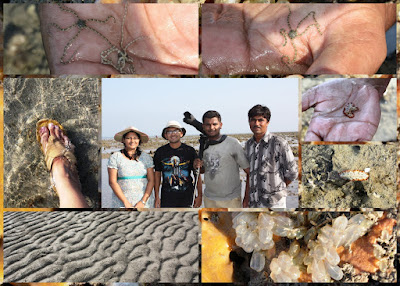 We also spotted two baby star fish and the guide placed them both in my hand. I wondered how beautiful they’d look on growing in size by January. The bight-orange, almost paper-thin sea slug, sea cucumber (brownish-cucumber shaped creature from which gum is extracted by certain African tribes) and tape worms were also fortunate enough to meet us! *winks* 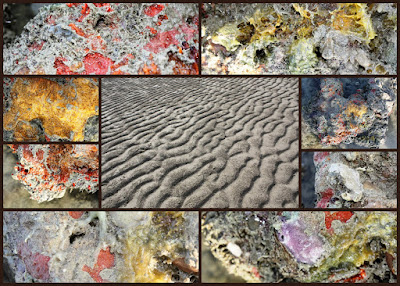 How many colours can you name? Don’t worry, this is not a quiz. I just asked the question to tell you that Sponges are found in colours that varied colours that you’ve hardly seen or heard about- 92 colours to be precise! They’re mostly found under rocks and never fail to bedazzle the tourist with their sheer variety of colour scheme.

A Happy and Fishy Ending!

By the time we were done with the oceanic adventure, the sun was glaring down with us and we were badly tanned. The hunger pangs were setting in and the walk back to the starting point seemed to take eons. However that did not deter our curiosity when we saw a dark guy shooting the marine birds with professional camera.

The guy, as we found out after our conversation was Arpit Deomurari, a naturalist, currently working with Forest Department and well known for his nature photographer, particularly birds. He spoke to us about his work, his adventures and his hi-tech camera. He even invited us to come for a session of marine bird photography, but sadly we had to decline due to prior commitments on diwali. After our brief farewell and exchange of numbers, we our tired legs traversed us back through water and onto solid land, where finally, we felt like home - more so because there was home-made pasta waiting to be devoured.

Hasanbhai mentioned-sometime during our walk-that even though he shows several marine plants and animals to the tourists, they’re never satisfied and happy until they get to see the puffer fish, octopus and sea anemones! To conclude, we were satisfied and certainly very very happy!!
I thank Picasa for helping me create the collages and saving me the task of uploading each image.
Posted by Preeti Datar at 3:10 PM

though...i wish u hadn't taken any coral back home.

we take juz one coral...but since most visitors take just one...think of the imbalance being caused in the eco system.
yeap...it's very difficult to resist the temptation of picking up a coral..but...

though...i wish u hadn't taken any coral back home.

we take juz one coral...but since most visitors take just one...think of the imbalance being caused in the eco system.
yeap...it's very difficult to resist the temptation of picking up a coral..but...

Radzee, the coral was detached already.....so its meant to be taken away. What's a dead coral gonna do? Think about it!