Peace, a singular word which defines my Golden temple experience.  Known to be one of the most significant and holiest Gurudwara of the Sikhs, Golden temple or Harmandir Sahib, embodies equality and belief. 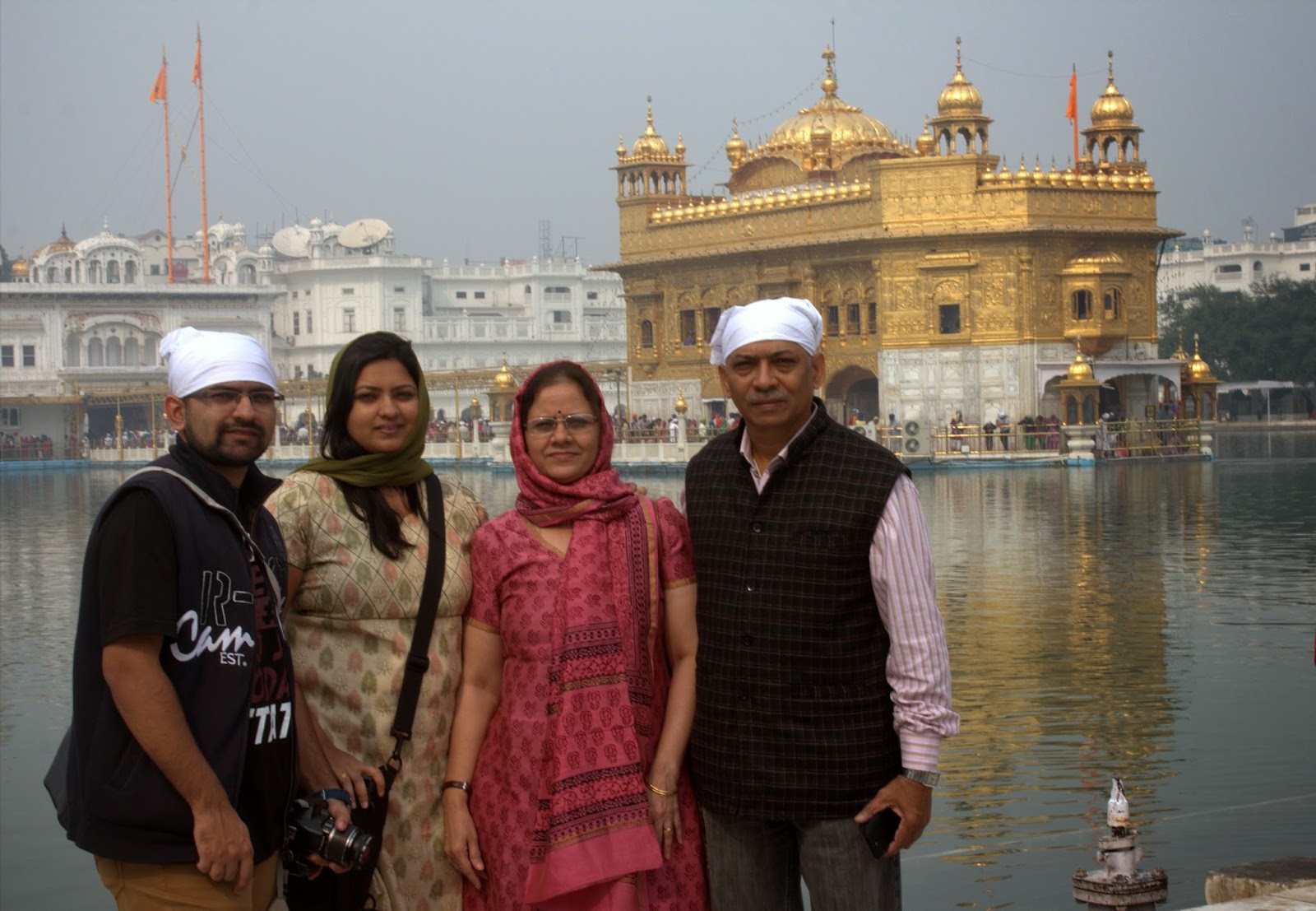 I had a chance to visit Amritsar and hence the temple during Diwali.  We visited the temple after breakfast when the crowds had just started to trickle in. 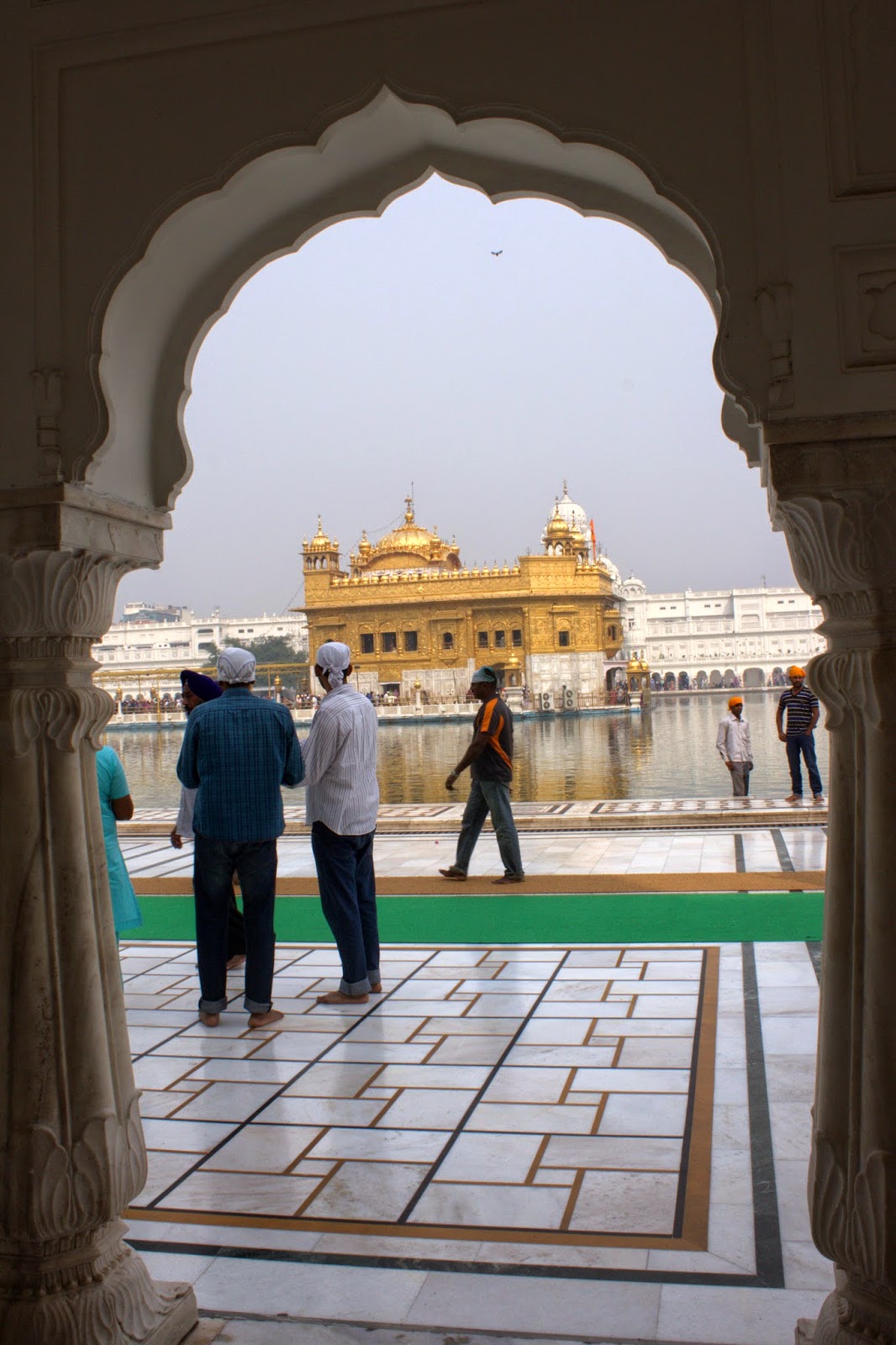 My first glimpse of the temple was through the dwar right after I deposited my shoes and covered my head, both as a mark of respect.   It is best to dress modestly to respect the religious sentiments – long pants and covered head are must. 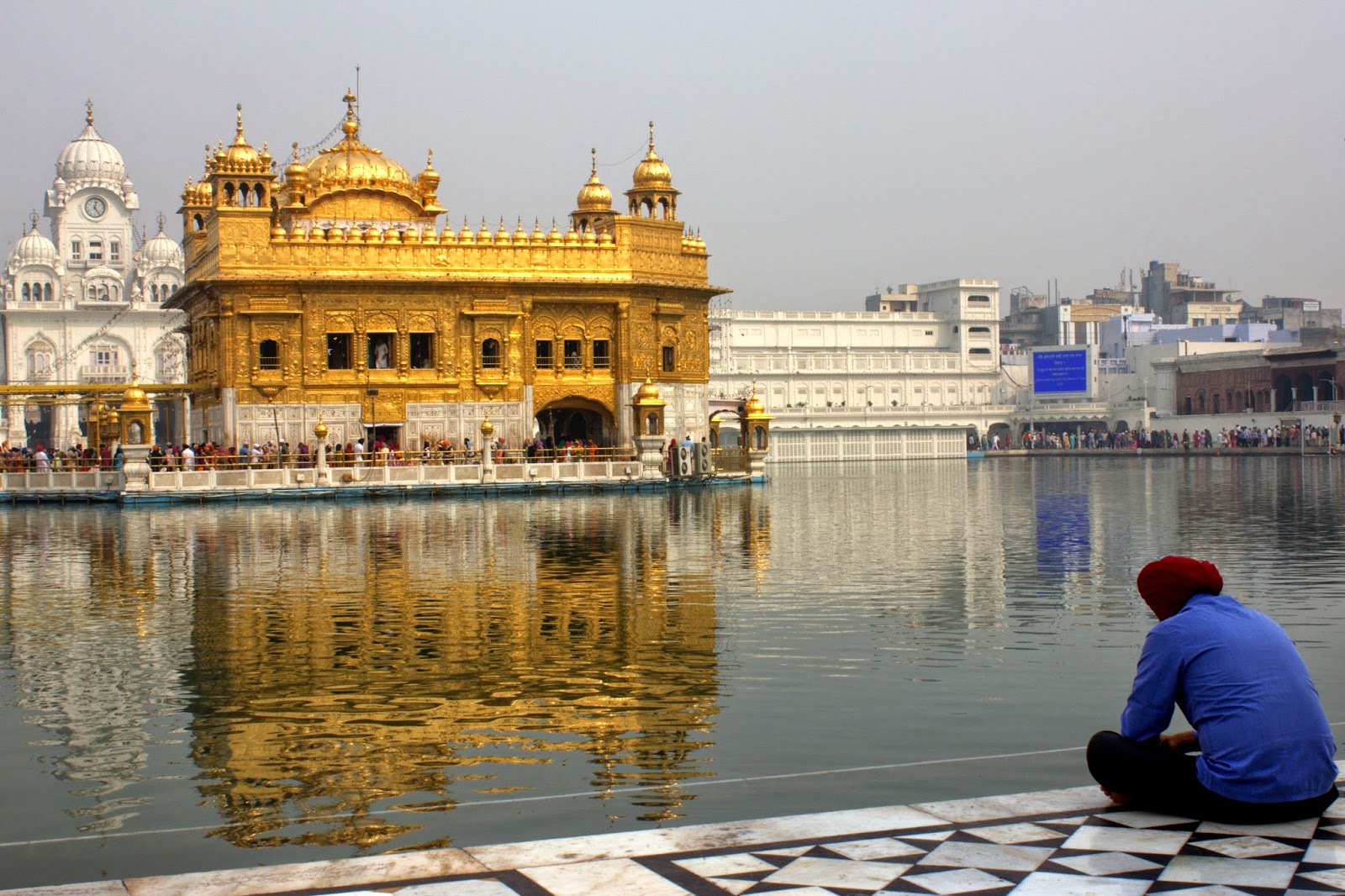 The temple complex is built in sikh architectural style.  The main temple is surrounded by holy water on three side and glitters gold as the sunrays fall on it.  The reflection on the temple in the gently moving water is a sight to behold. 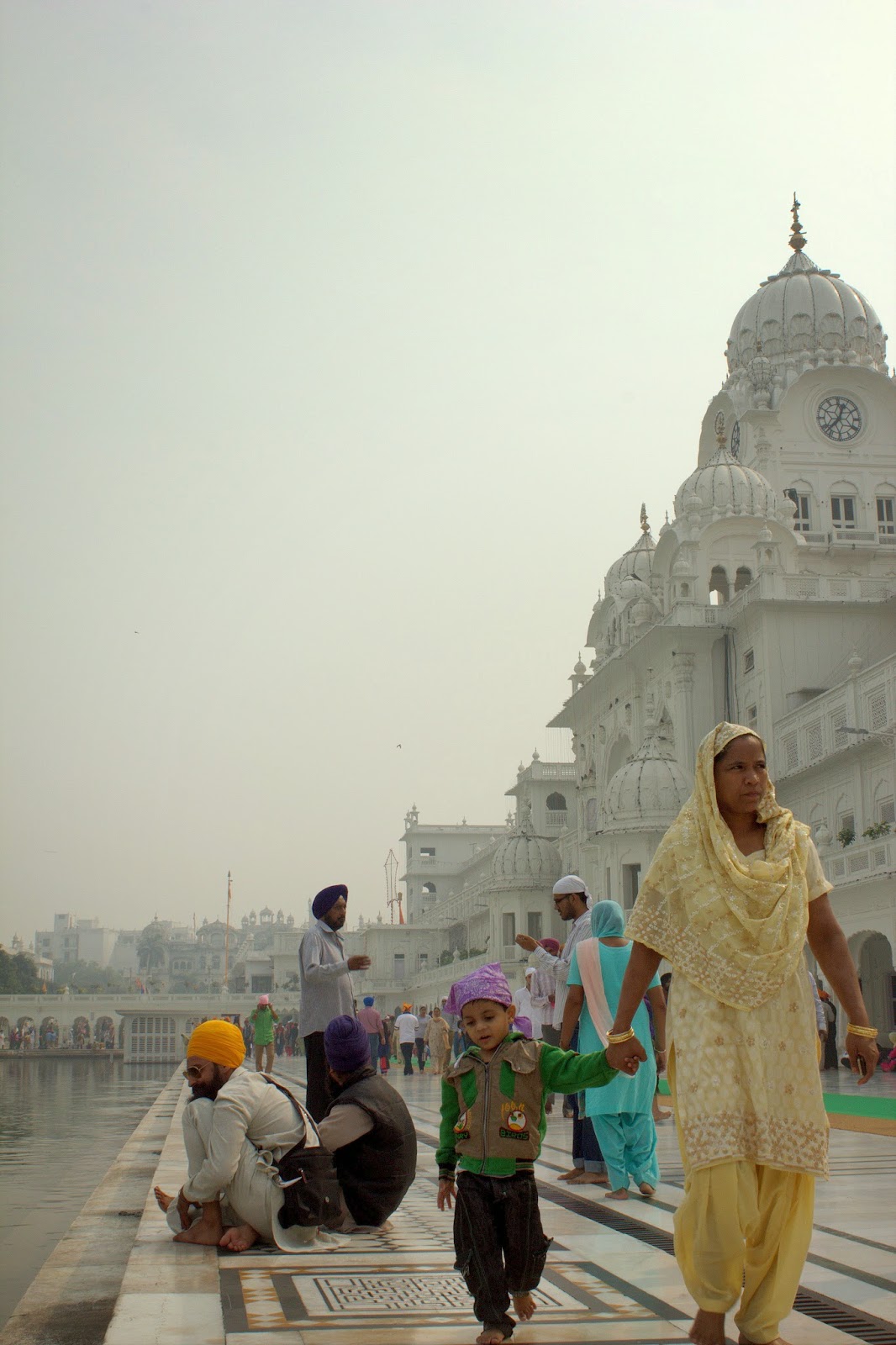 We took a parikrama around the holy water on the cemented pathway admiring the complex from every angle.  Thereafter, we stood in the line to wait our turn to enter the main prayer hall.  After saying our prayers, I enjoyed the Prasad (piping hot rawa halwa made in desi ghee) which was being served to everyone at the exit.  We also brought some Prasad from the temple to relish later. 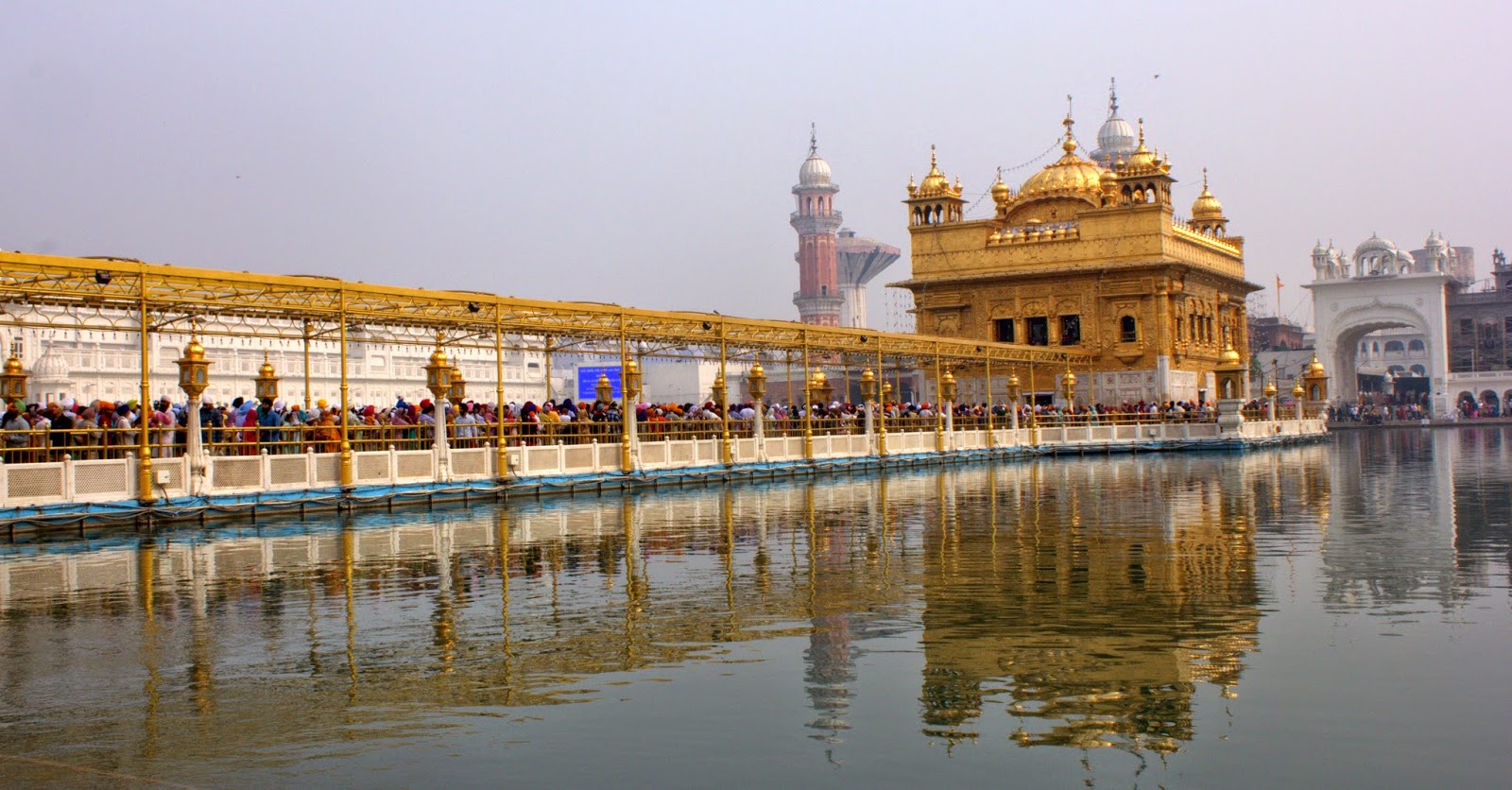 Just outside the main temple is a courtyard where a group of devotees were chanting prayers/ religious songs.  I sat here a while, enjoying the chants and the peace of this place. 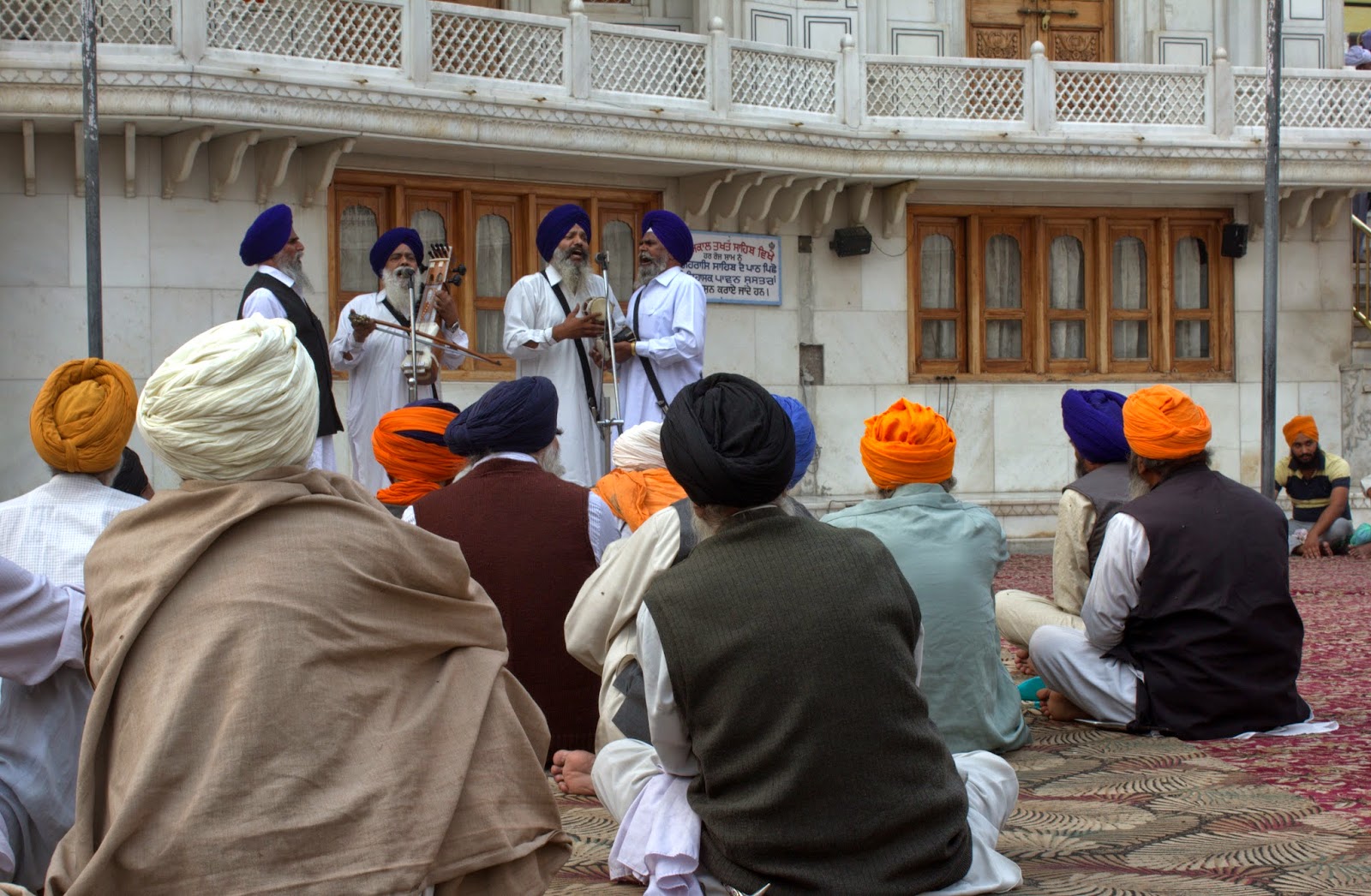 It was very evident that Sikhism not only preaches, but also practices equality.  No matter how rich or poor,  devotees volunteer in large numbers to serve the people  – be it at the shoe counter, helping with the langar, cleaning the temple complex etc. 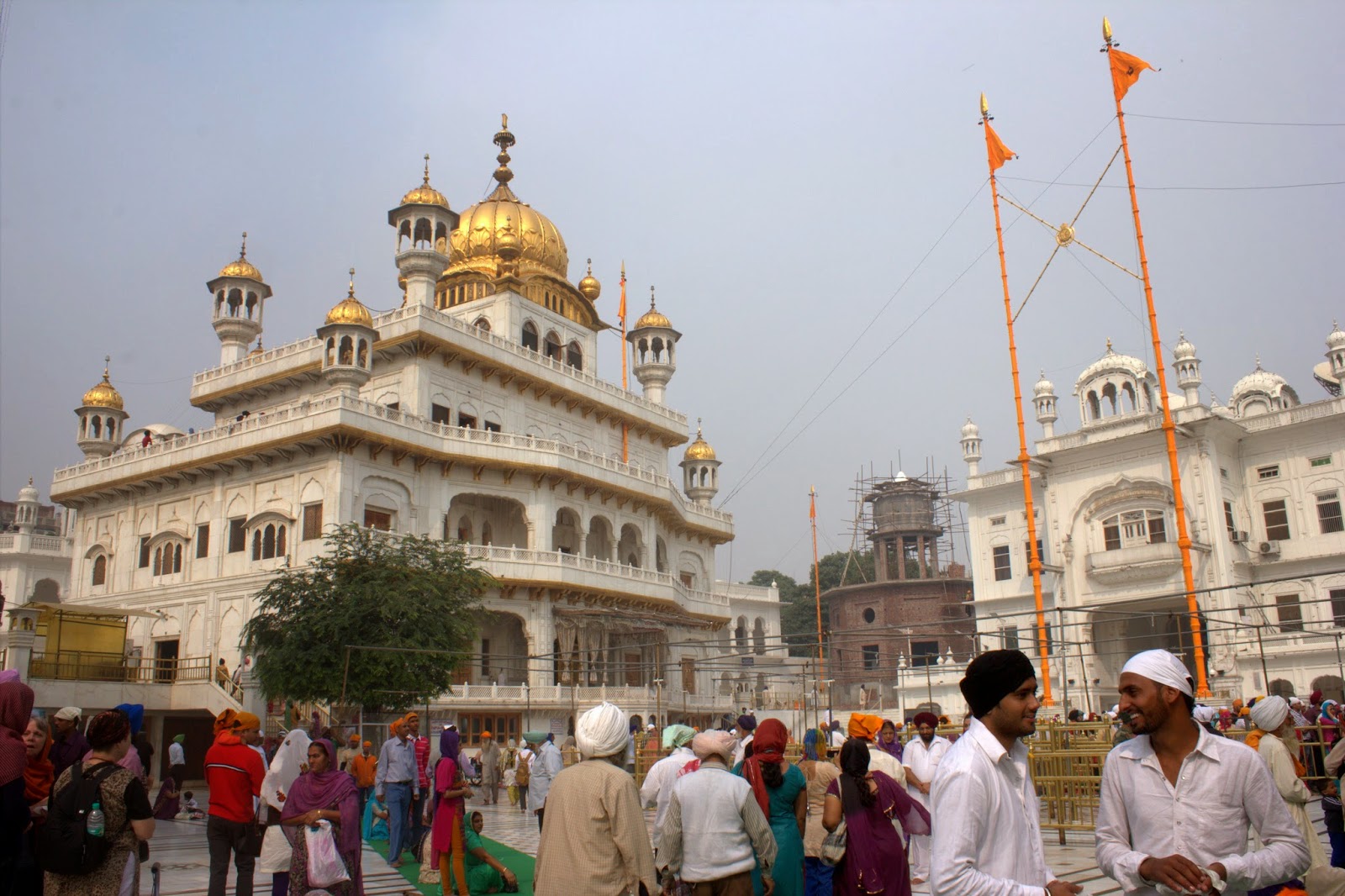 Golden temple kitchen serves tea for devotees at all times.  Its kitchen also caters to 10,000 or more people daily in its langar, traditionally comprising of pulses, halwa and roti (main Prasad, which you need to accept with both hands).  I didn’t get a chance to enjoy the langar, but the tea was refreshing.
Golden temple is significant not only for its architectural beauty, but also because it is here that the Guru Granth Sahib, the holy text of Sikhism, is present.  As part of the fervour and spirituality, this holy text is brought into the main temple each day to enable devotees to worship it – which, in itself is no short of a grand ceremony!

I wasn’t content with one visit to the temple and came back again post dinner.  Lo, behold! – Golden temple at night is even more stunning. 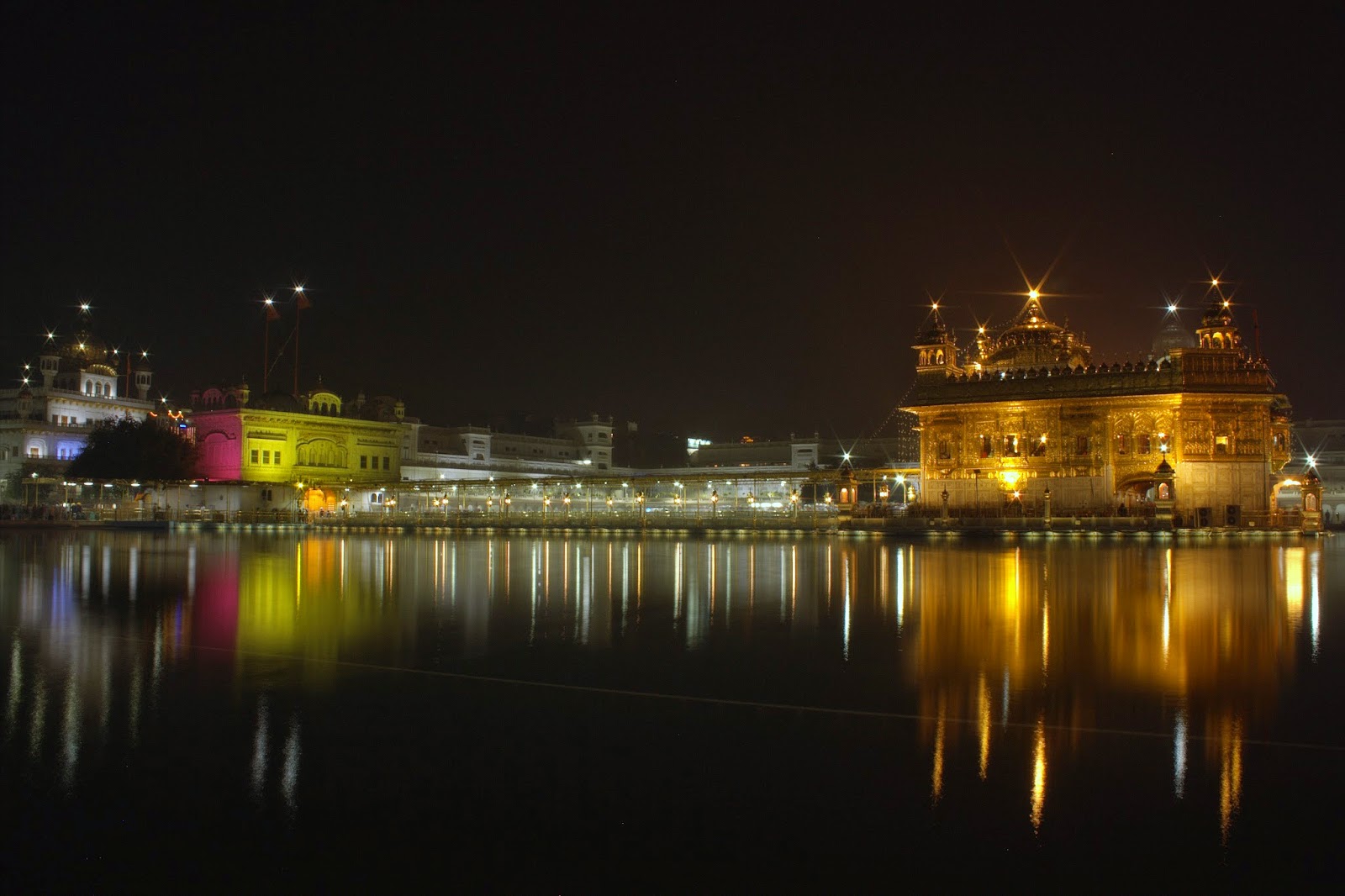 The crowds were minimal and the entire complex was much more serene.  It was almost as if the Golden temple was content to have attended to the devotees in its own characteristic style. 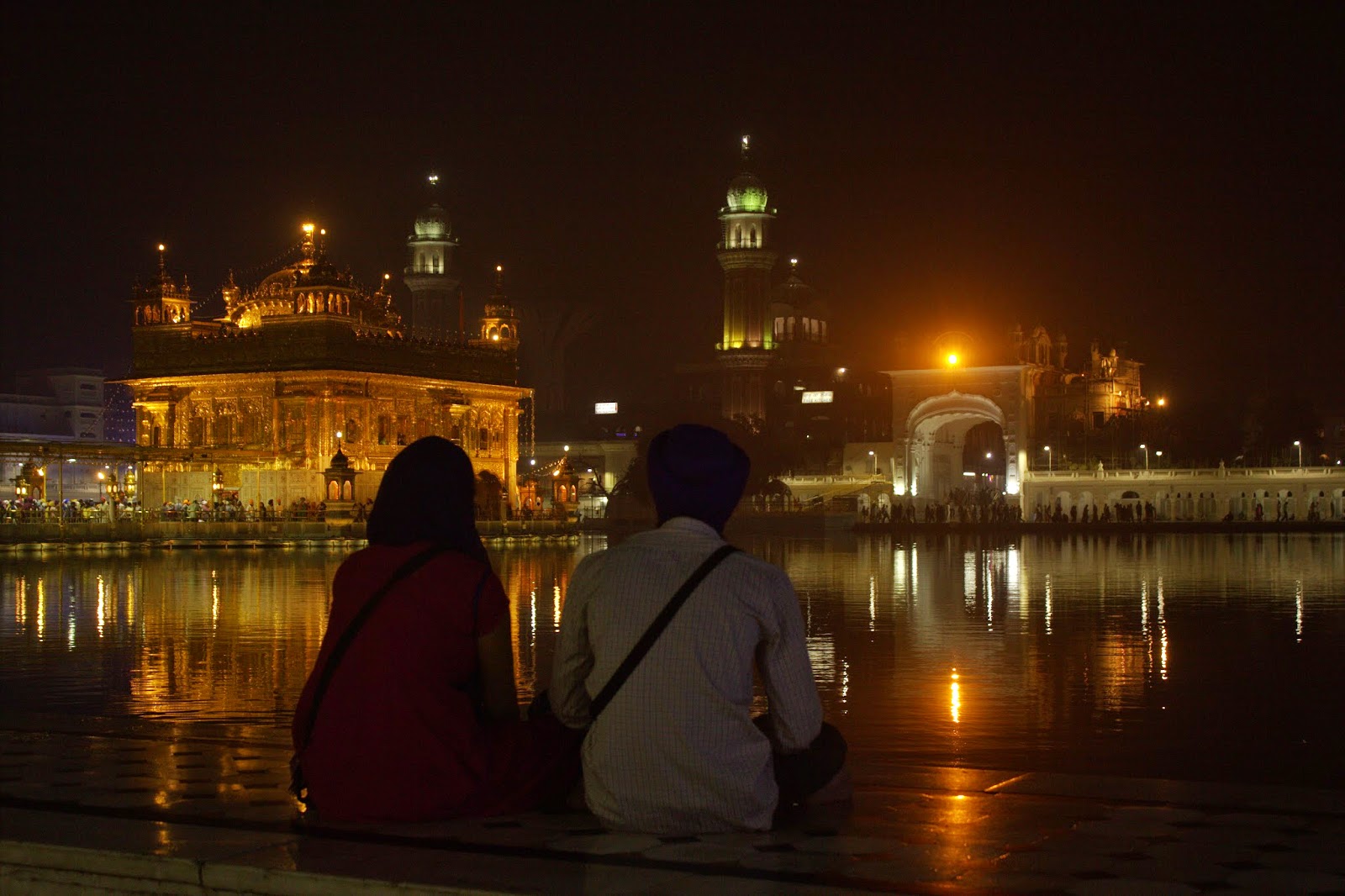 I must admit, I am not religious, but I was sold on to this stunning Gurudwara, the hospitality and devotion of the people and of course, the immense peace the place brought me.

And I definitely have a reason to go back here, my langar is pending! 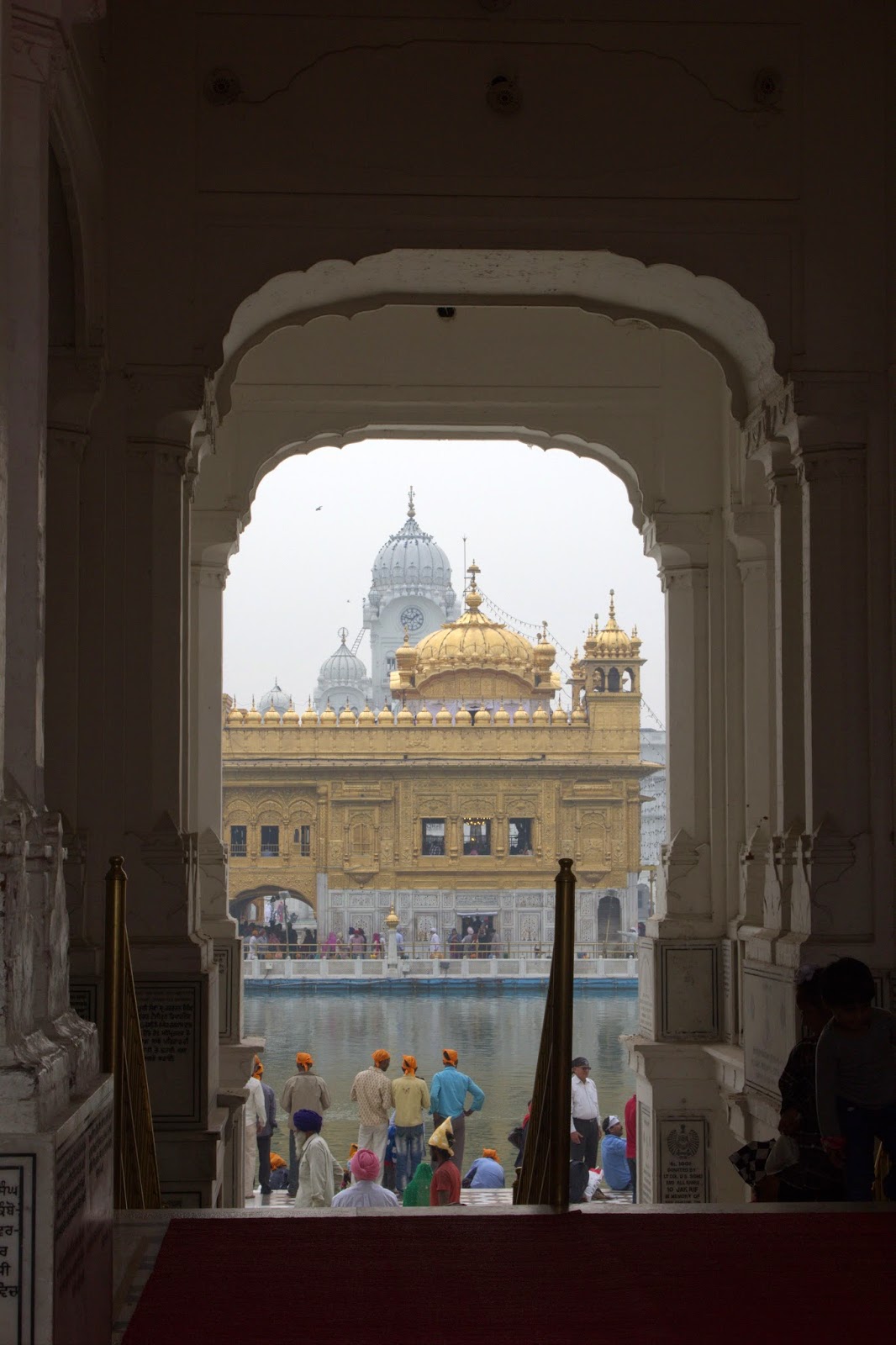 Loved your panorama pics, makes one ache to visit the Golden Temple right away!

Have heard a lot about Amritsari street food, kulche, dal tarka, jalebi and the fish tikka, did you forget these goodies?

Thank you so much.

Well, I'll write about the food soon. It's definitely a highlight of the place!