Quarter 1 of my challenge was rather exciting and interesting.  While quarter 2, in contrast, was dull – the only high-point being a long pending, full-fledged family trip to Kashmir. 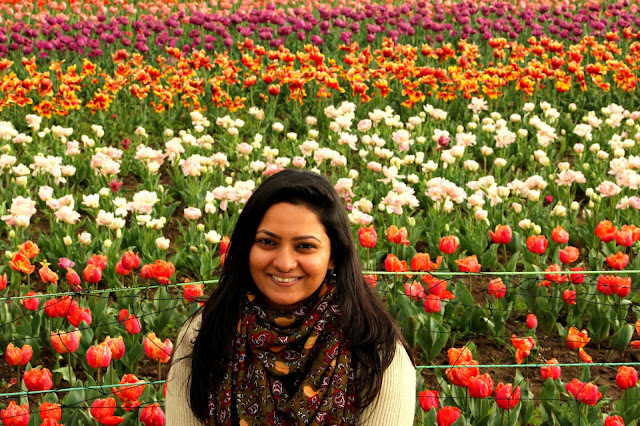 I visited Srinagar (just for a day!) in June 2015 as a part of road trip to Ladakh.  At that time I was rushing from one place to another, trying to see as much of Srinagar as possible.  But the best memory I have of Srinagar was our lovely and relaxing stay at Peacock Houseboat, Nigeen lake.  Nine months later, here I was again on a rainy April morning, sitting in the balcony of our bnb (Bloomingdale) and sipping on Kahwa. The chatter of fluffy sparrows and a nice book gave me company.  This wonderful bnb run by Mr Firdaus was to be our base for the Kashmir trip.

Our itinerary, although packed, had a fair mix of nature, architecture, trails and relaxation.  Upon landing, we visited the famous Tulip garden.  These flowers are known to be rather delicate and the untimely rain in April was already damaging the last standing tulips.  I guess we were fortunate enough to see rows and rows of bright tulips gently swaying in the wind, touched by the rain drops.
Such a feast for the eyes!


Our city sojourn included visit to the ancient Shankaracharya temple (about 350 stairs), enjoying commanding views of Dal from Pari Mahal, relaxing at Shalimar bag to the sound of fountains and under the shade of Chinar trees (leaves are like those of Maple tree), sunset over Dal lake from Nishat gardens and sunset Shikara ride at Dal lake. It is so difficult to pick a favourite, but I’m partial to sunsets; no guess here what my favourite would have been. 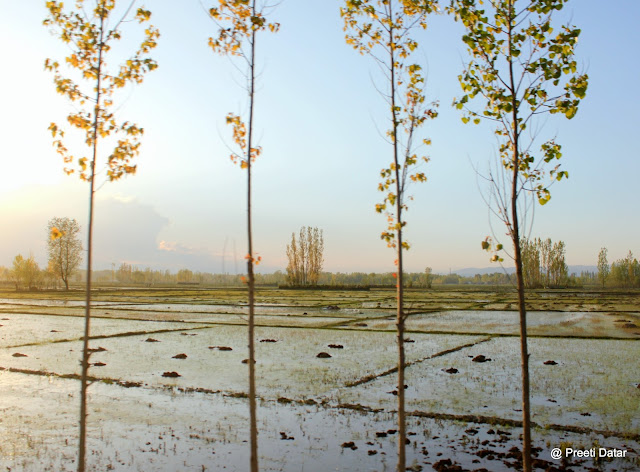 No touristy circuit is complete without visiting Sonmarg, Gulmarg and Pahalgam.  In June 2015 I had seen the lush meadows of Sonmarg, dotted with adorable sheep and framed by the snow clad mountains.  Hence it was amusing to see Sonmarg covered in snow.  My family had a gala time snow sledging and making snow man and snow angels!  My brother and I preferred climbing Sonmarg on foot, in knee deep snow and bearing the brunt of numb feet.  The panoramic views from the top made the effort worthwhile, hot maggi added to our small joys!

Covered in a blanket of snow, Gulmarg left me rapt.  As our Gondola (lift which we took to second level) ascended, we could see the mighty mountain lined with poplar trees and rustic shepherd huts.  Until the first level the snow was walked upon (footprints were visible) and at the first level is was a sea of people indulging in snow activities (skiing, snowboarding, etc).  The ascend to the second level was far from gentle and commanded mighty views of the bright blue sky and the majestic mountains.

Our gondola dropped us at second level and after some trouble with breathing/ head-ache, I thoroughly enjoying the expanse of snow around and giving my brother company while he shot a time-lapse.  There was a lake beyond second level which people can access in summers. Also, we were told that the Pakistan border is a stone’s throw away.  Thereafter, we joined the hoardes of people and enjoyed snow activities at level one.  I had learnt basic skiing in 2006 andalso skied one at ski Dubai in 2009.  Hence, it was exhilarating to ski again! We did a day trip to Gulmarg, but there are nice hotels where one can stay the night.  For avid skiiers, a trip here in January/ February would make for a perfect ski-cation!

Unfortunately while we were in Srinagar, there was Bandh declared which limited our options.  The drive to Pahalgam was long, but without stops as it was not quite safe on this route, although tourists are rarely harmed. Pahalgam was very crowded, the touristy-ness of the place got to me and all the youngsters in our group decided to boycott a horse ride to Mini Switzerland and decided to climb instead.  This did not go down well with horse owners who followed us for a fair bit of the trek and then gave up realizing how determined we were.  Mini Switzerland (Baisaran) has stunning landscape – a perfectly meadow atop a hill! There isn’t much to do here and many people head onwards to Tuliyan Lake. Next we made a quick stop at Aru valley (the drive next to Lidder river was picturesque - but the place did not quite appeal to us) and Chandan wadi (sheer waste of time, but one route of Amarnath yatra starts from here), but didn’t have time to see Betaab valley (apparently it is very well developed).

A clear high-point and my undoubted favourite was a day trip to Yousmarg.  On our way we stopped by Charer-e-Sharif dargah and random viewpoints to soak in the views of meandering roads lined with sarson and apple orchads.  Here we trekked (in mostly sludge) on the meadows, beyond the cobbled path and down to the river. A shepherd guide gave us company and also insights into the life in Yousmarg. The best things I liked about Yourmarg was the lack of tourists and untouched meadows! I wish I could stay here in the wooden cottages run by J&K tourism – alas, in the next trip! 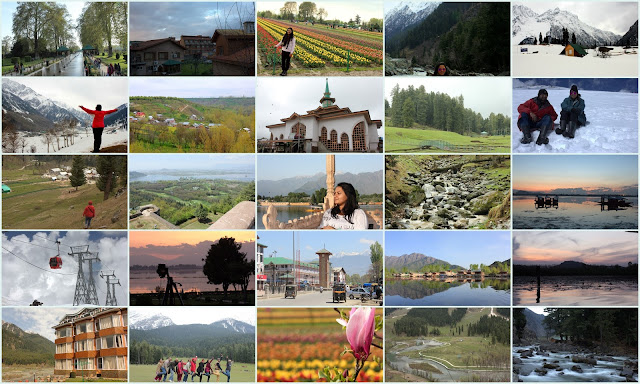 The shopping almost towards the end of the trip was enjoyable, while the drive/ walk through Lal chowk in the heart of Old Srinagar during the Bandh (thanks to the bravery of Mr Firdaus) was very scary.  Needless to say, I did not leave Kashmir without spending a night in a houseboat (apple orchad), this time at Dal lake.  This definitely is the good life!

I had an 8-man tent lying around for years and an itch to try my hand at star trail ever since I bought a wired remote control for DSLR.  On the day of full moon (7th May), 6 of us hired a car (from Myles) and left from Mumbai at 5 pm for Naneghat.  The plan was to (hopefully) shoot some fancy star trails, light a bbq, cook chicken, sausages and paneer for dinner, with some kingfisher beers by the side (we were fully stocked and loaded with beers in a neat ice box!)

We took unreasonably long to reach Naneghat.  By the time we got there it was close to 10 pm.  We quickly pitched our tent and tried to get the bbq started, but the wind played havoc.  Luckily there was another group who were cooking/ bbq-ing inside a cave (to our horror and dismay!) and we got some fire from them (literally, by burning a few coal embers from their barbeque).  Soon it was almost 11:30 and we set-up out cameras for the star trails.  There were other groups for star gazing and star trails and there was so much commotion and torch-light that it was impossible to ensure a dark sky.  Within no time the clouds came rushing in and hid all the stars and tainted our plan to shoot star trail. 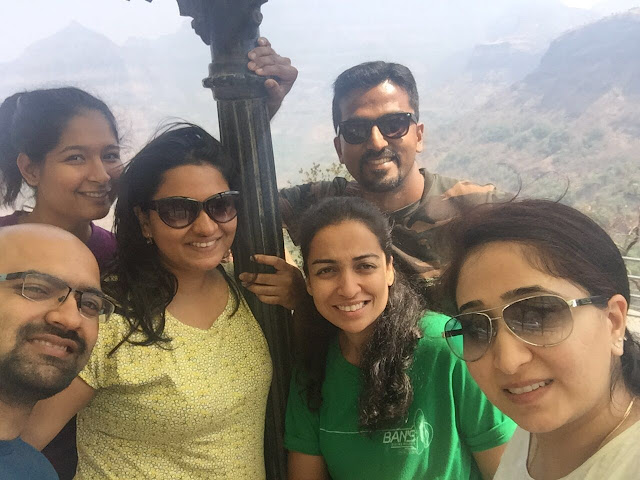 Instead of being upset by the loss of opportunity, we enjoyed our BBQ and drinks.  Sleeping in the tent was a good experience as well, albeit the stones poking through the bottom of the tent.  Early in the morning we climbed on the mountain to get a view of the surrounding area.  It was then that we realized that the frame we had chosen for star trail actually had many high-tension electricity wires passing through!  Lesson learnt, go early and set-up early. 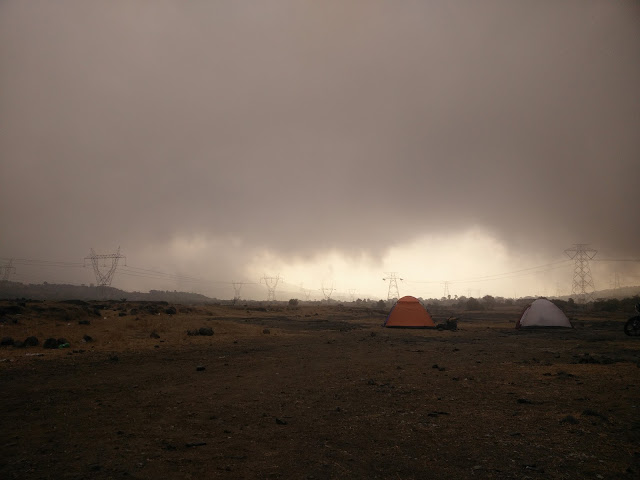 After that we had a delightful breakfast of poha at a villager’s home and started back for Mumbai.

June had me worried.  Initially I had no plan to travel and then I had a fantastic plan to visit Coastal Karnataka (Karwar & Gokarna).  However, my body had other plans and it caught a nasty fever.  I was on antibiotics for over 8 days and the travel plan was shelved.

When my health improved, we visited Pune (day trip) and had amazing food at Malaka Spice, Koregaon Park.  The outdoor seating was tastefully done.  Also, the sheer variety of the oriental food they served boggled me! Among other things, dishes which stood out were Madurasi soup (Indonesian), three mushroom stir fry, Top Hat (Malaysian dish comprising of rice cups stuffed with flavourful minched veggies) and chocolate brownie with ice cream (we ordered 3 portions between the 4 of us - gluttony!)

My favourite cousin was in town. Besides, how could I say no to wine?! Because Sula vineyard is always a good idea! 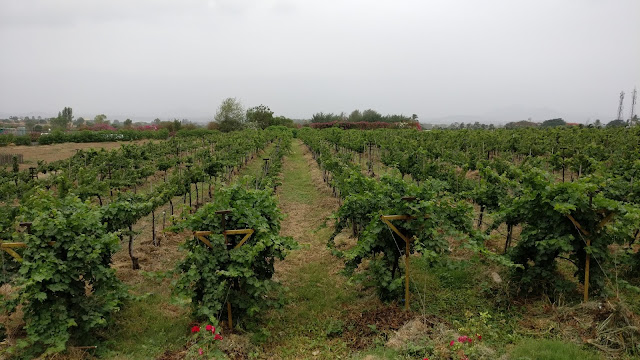 We drove to Sula, stopping at Shree Datta Snacks for breakfast-cum-brunch (where we hogged like pigs and ran a measley bill).  At Sula we had multiple agendas, all of which involved wine – white, red, sparkling…. 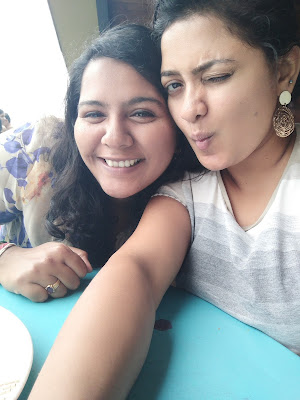 While wining, we forgot the dining, so you do get the point :) One glass a day is healthy right? While in Sula, we ensured we’d be healthy for a couple of days, if not more! 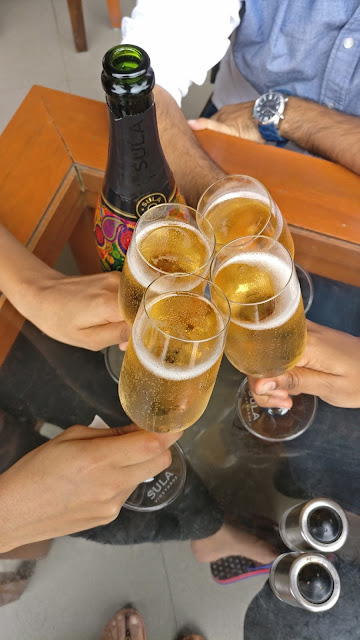 Hello Preeti! Browsing through Reading List, found that you have not posted anything for more than a year. Should hope you haven't stopped travelling, though.

Loved your Kashmir pics! Only time I visited Kashmir was more than 35 years back, when I was in school and the visit was with family on my father's LTC. Still remember the rice tinted with zafran and some delicious curries, the ropeway at Khilanmarg and the trout fishing at Pehalgam etc etc.

Dear Soumyendu, I've been off the grid though I haven't stopped traveling. However I'm not inspired to write. Hopefully I can keep posting smaller extracts....

I've been to Kashmir twice.... It is touristy but I love it... You should revisit the place :)